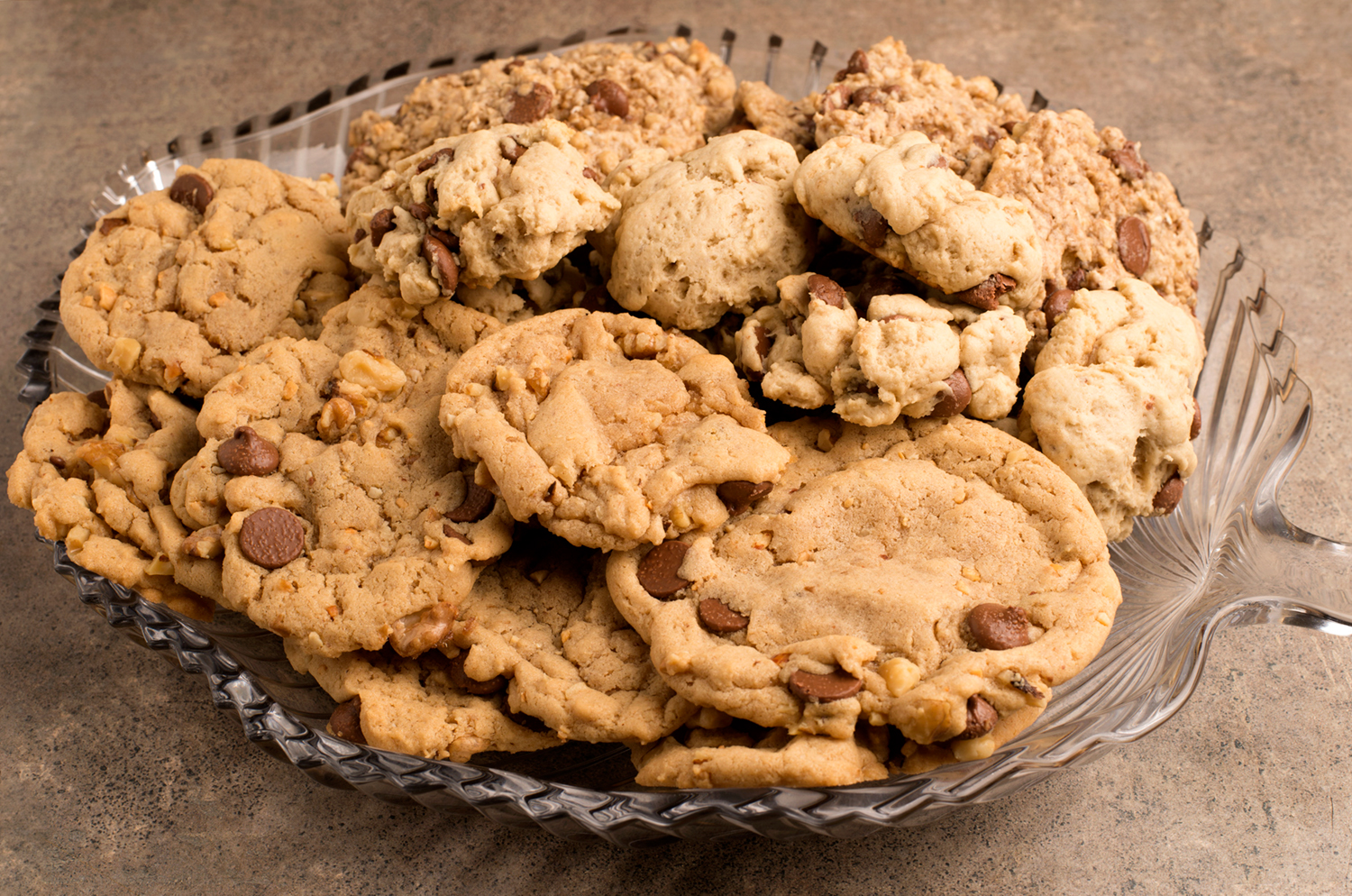 As a child, I exasperated my mother by trashing her kitchen several times trying to create cookies by willynilly dumping ingredients into a saucepan and heating it on the stove. Then she got strict. Absolutely no more cooking without a recipe. From then on, recipes became the rock-solid basis of cooking in my mind.

Nonetheless, I continued to harbor a pinch of doubt. I suspected that there could be a wonderful world of cooking beyond recipes. My father, who had gone to baking school in the military, enjoyed making sourdough which he shaped into a variety of biscuits, bread and rolls. I noticed later as I traveled widely that basic sourdough bread comes in a massive number of shapes and is cooked in many different ways in different cultures, from French baguettes to flat griddle cakes to the steamed buns of Asia and the large round flat breads of western China.

I watched Asian cooks in street markets whip up a variety of sauces using a few simple ingredients and apply them to various meats and vegetables in different seasons, with nary a recipe in sight. I saw professional chefs make delicious adjustments to their menu offerings based on fresh seasonal ingredients. There seemed to be a whole world of cooking beyond grabbing a recipe off Pinterest and meticulously following it. And yet… the vivid memory of the gooey globs I had concocted in my mother's saucepan convinced me my mother was right, too. Throwing out the rules and just winging it had been a disaster. What was a free-spirited cook to do? I was determined to find a formula that could both simplify cooking and make it more versatile – a magic world beyond recipes that the best cooks seemed to live in.

Two things opened the door to that world for me. The first was that I developed a severe tomato allergy that required me to search high and low for an easy, affordable, abundant way to get a daily bite to eat in a food landscape drenched in tomatoes. The second was that I began to learn how to make French pastries.

French pastry making begins with mastering crusts, from cookie-like tart shells to the light bread-like pastries used for eclairs to forms of flaky puff pastry used in croissants and paniers. Only a few types of pastry need to be mastered before moving on to making dozens of different kinds of pastries by combining the pastries with various fillings, toppings and molding them into different shapes and sizes. While one follows a recipe to make a basic crust, there remains huge scope for creativity in the final form the pastry takes. Fruits in season can be called upon to make many versions of spring, summer, autumn and winter versions of tarts using a single pastry recipe.

I began to collect basic recipes such as these that were highly versatile and make them the foundation of my cooking. Examples are a pizza dough recipe, a basic vinaigrette recipe that changes depending on the type of vinegar, fruit juices, and spices I add to it, a basic enchilada sauce that can be adapted for tacos, fajitas, soup and taco salads, hollandaise sauce to which various spices can be added and a basic cream pie recipe that I can make in various flavors. I have a couple of basic bread and roll recipes that can be transformed into an entire bakery's offerings with the addition of nuts, raisins, flavorings, different kinds of flour or sweetening and different ways of baking and shaping the dough. I call these reliable recipes “food templates.”

I reorganized my kitchen to take advantage of this approach to cooking, making sure that I had all of the ingredients on hand to make the basics and then adding a smaller amount of spices, flavorings and other items that can provide variety. The unexpected advantage of cooking this way is that both the time I spent cooking and the money I spent on food plummeted while the satisfaction factor rose off the charts.

The first chocolate chip cookies were made at the Toll House Inn in Whitman, Massachusetts in 1938, but the cookies' popularity boomed during World War II when families sent them to their sons and husbands serving in the military. The cookies continued to be popular but basic family fare through the 60s and 70s. It wasn’t until the 1980s that they seriously entered both fast food and gourmet cuisine with high-profile franchises such as Mrs. Fields Cookies. I remember making her cookie store in Hong Kong the first stop after landing at the airport there. Today, the chocolate chip cookie industry is large, as are the cookies.It includes a wide variety of ingredients and expensive gift baskets, tins and baskets. It is not uncommon to find chocolate chip cookies that sell for the price of a meal. They come in all sizes and shapes, from cookie bites to cookie pizzas, and are eaten as daily fare and at virtually all holidays. Mini-wars are waged over what restaurant serves the best chocolate chip cookies.

And yet we’re talking about a pretty basic food that often sells for a wildly inflated price. How can we replicate these best chocolate chip cookies easily in our own kitchens?

Start with a great recipe. After trying at least a dozen different ones, I settled on this one which forms the basis of all of the chocolate chip cookies that I make. Use high-quality ingredients, especially the chocolate and the butter. Don't overbake. It's that simple.

I’ve never gone wrong with just this basic recipe, but you don’t have to stop there. It’s in adding variations that the fun begins.

You can keep going from this point, though. We often have chocolate varieties of candy left over after holidays – Snickers, Reese’s Peanut Butter Cups, M&Ms, Lindt chocolate balls, Ghirardelli squares and other types. I freeze them in bags until I want to make cookies, and then chop them up and use them in either the basic cookie dough recipe or the peanut butter variation. 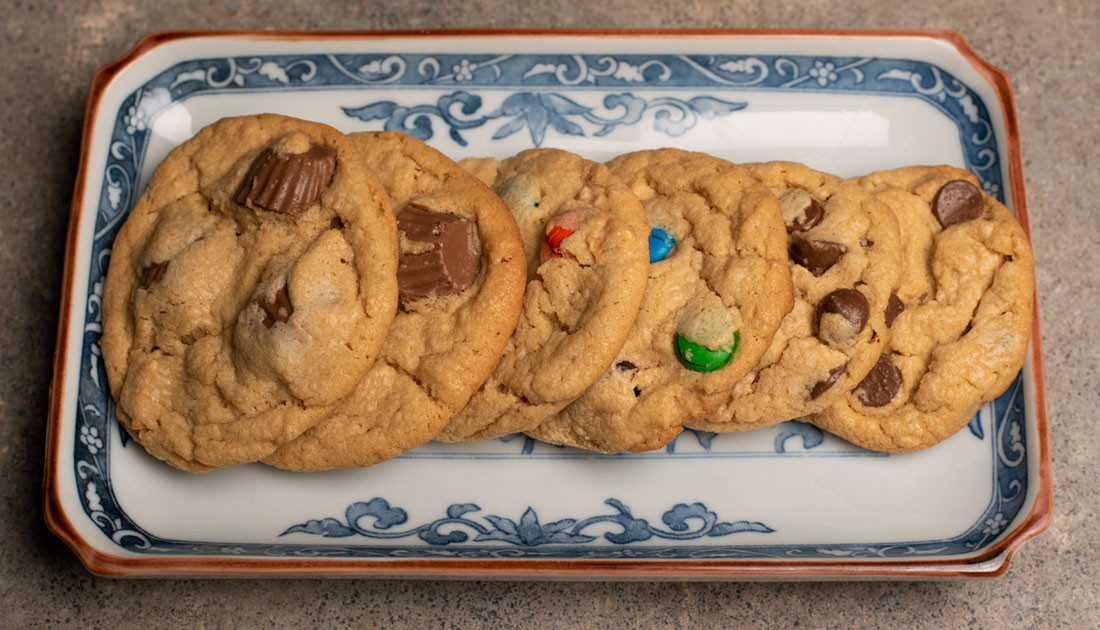 This cookie has some delicious variations. When we had a bag of leftover peppermint bark squares with layers of both white and regular chocolate, I chopped them up and added them with slivered almonds instead of the standard macadamia and white chocolate. 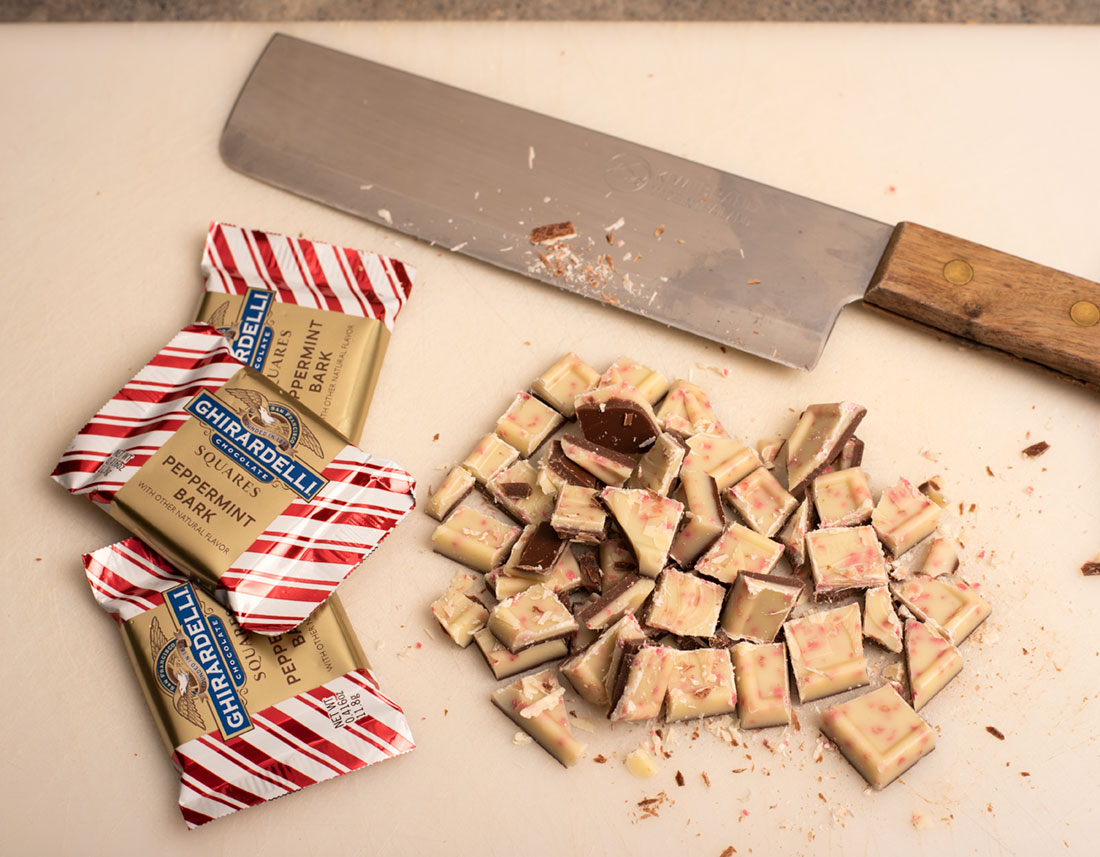 Another yummy variation of the basic recipe is to chop up leftover Lindt chocolate balls and add them to the cookie dough along with ½ cup of sweetened shredded coconut. The coconut adds chewiness that may make this my favorite type of chocolate chip cookie. 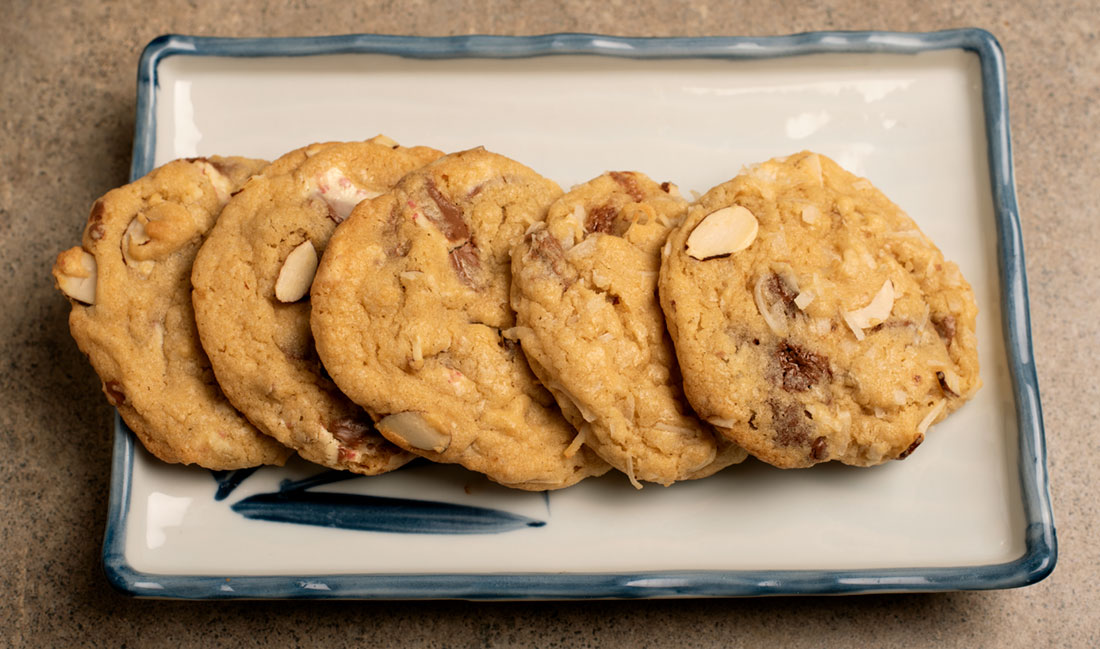 Above left, chocolate chip cookies with chunks of peppermint bark and almonds in them and a version with chopped Lindt chocolate balls and shredded coconut. 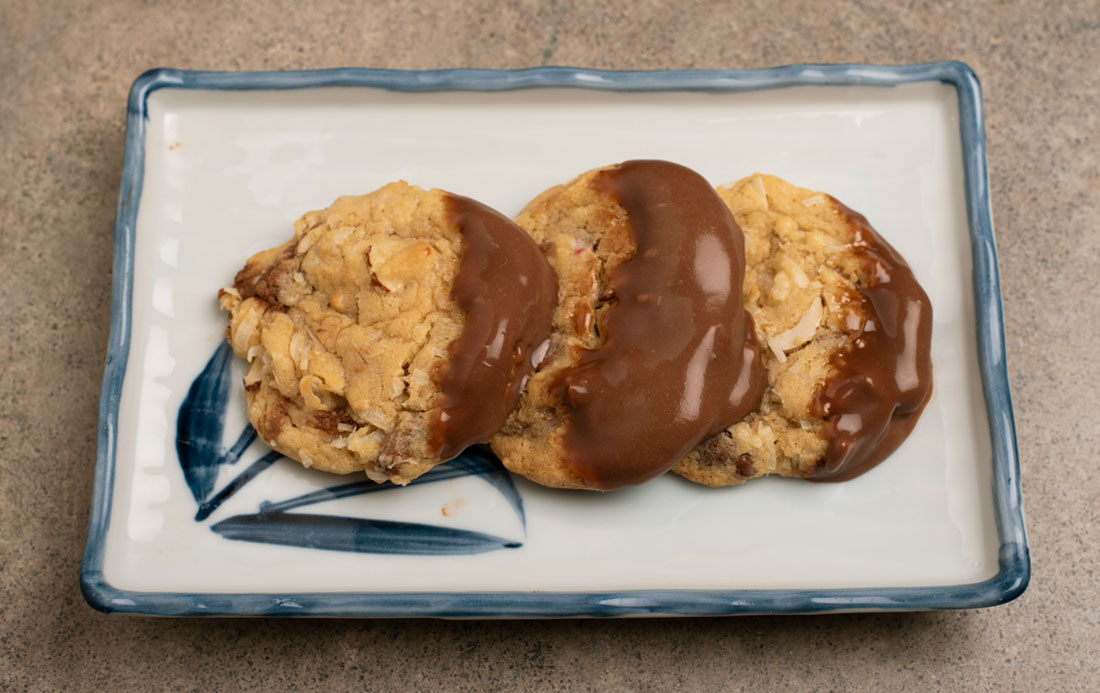 I dipped some of the cookies in ganache left over from a family birthday cake for a gourmet touch.

Pumpkin chocolate chip cookies are another variation. To the basic recipe, I add 1 cup canned pumpkin puree. I use the maximum 3 cups flour, 2 tsp. baking soda and ½ tsp. salt. I add these spices - 1 tsp. cinnamon, 1/2 tsp. ground ginger, 1/4 tsp. each of nutmeg and ground cloves. Add a cup of nuts if desired.

Here are some ways to vary the basic recipe to your preference: Adding more flour will make the dough have less spread so that the cookies are thicker and gooey in the middle. If you want them to be flat and chewy, cut down on the flour. Using all baking powder makes them puffed up and more cakelike, while using all baking soda makes them flatter. With minimal flour and all baking soda, they will be thin, chewy and wafer like. For the ones in these pictures, I used half baking powder and half baking soda.

There are many different things you can do with the dough. Make cookies for ice cream sandwiches or serve the cookies on a plate with ice cream and toppings. Spread them in a baking pan to bake and then cut them into bars or on a pizza dough for a cookie pizza. 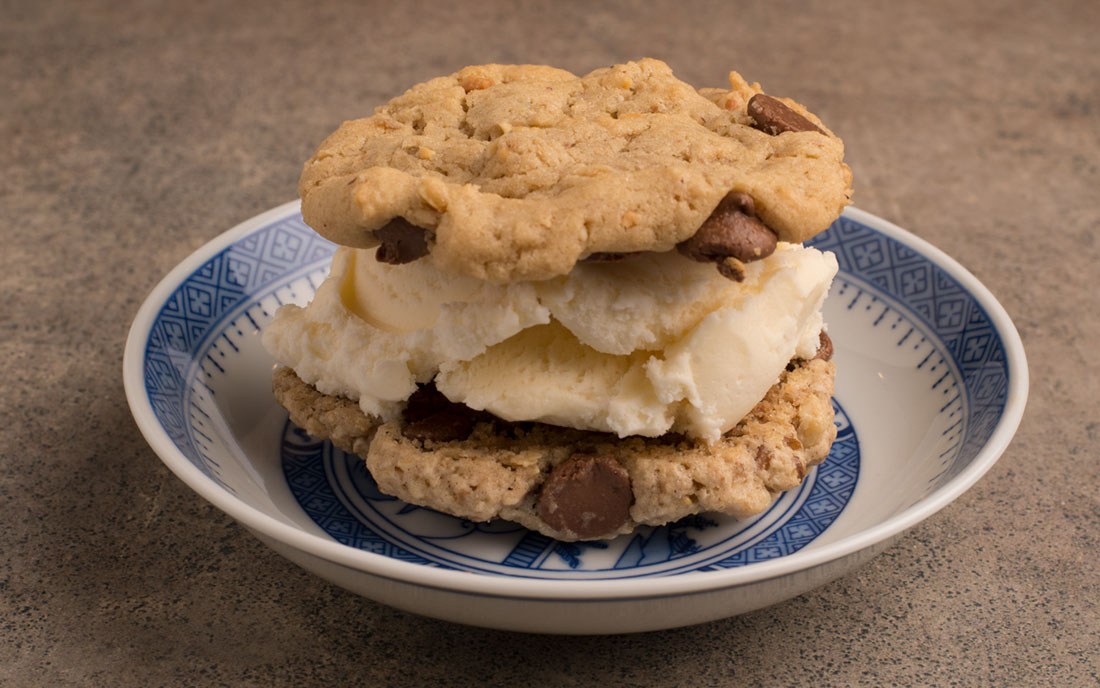 I cook only a few cookies at a time and roll the rest of the dough into plastic wrap and freeze it. When I have to take cookies to an event or a friend drops by to visit, I cut the dough into individual cookies, place them on parchment paper on a baking sheet and pop them in the oven for 10 minutes for an instant no-mess treat.

The way you present cookies can add even more variety and interest to this simple food item. Here I have placed a variety of cookies, all made with the same basic recipe with different additions, into a cardboard gift box to give to a friend along with a card. This makes a nice gift for almost any occasion when paired with different kinds of cards or tags and tied with ribbon or yarn. 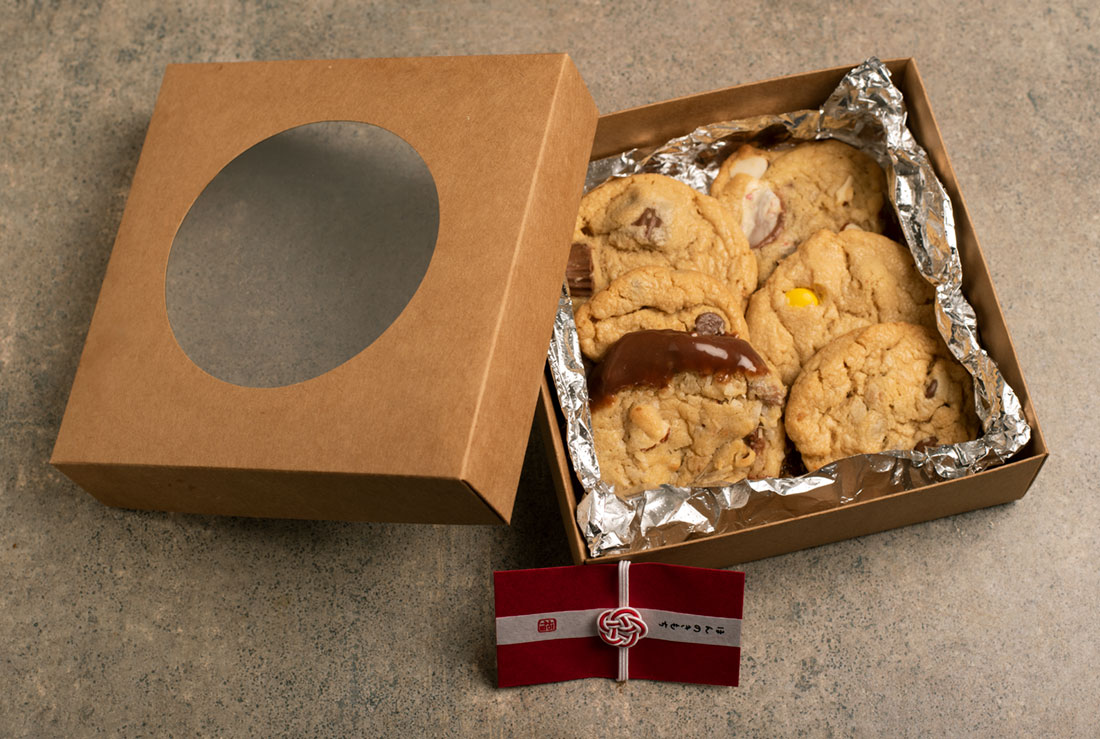 The same goes for almost any basic “food template” recipe. I make large batches of pizza dough to freeze in balls and use in quick pizzas using many different kinds of toppings, make various flavors of butter to spread on bread or melt on cooked vegetables and add different flavors to basic vinaigrettes and olive oils in which I fry meats and vegetables.