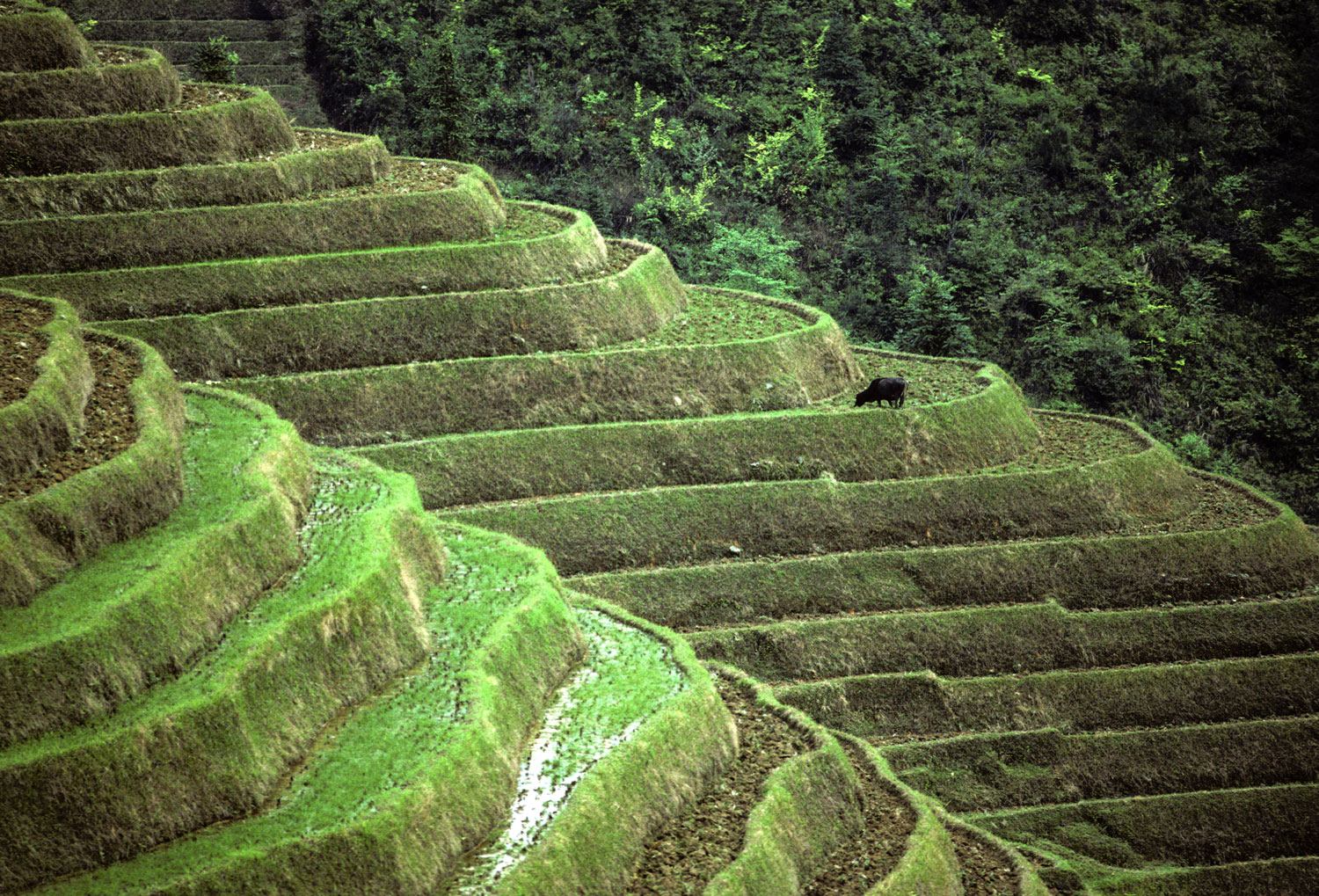 Terraced fields and a water buffalo high in the mountains of Guangxi, China.

As a young foreign correspondent in China, I read in a local newspaper one day that a mountainous village not far from the scenic southern city of Guilin was being opened to foreigners for the first time. I immediately made arrangements to visit it.

My husband and I were surprised to find when we got there that we were the first foreign journalists to hike into Ping’an (Peace) village at least since the Communists had risen to power in China in 1949.

Ping’an Village was perched among steep terraced mountains, its residents living in hand hewn cabins without electricity but with an ingenious bamboo plumbing system that brought fresh water from mountain streams right to their kitchens.

Hundreds of thousands of tourists soon followed, transforming the village and other nearby ones into crowded tourist destinations with signs in English, souvenir stands, restaurants that serve local specialties and standard Chinese and Western food, hotels, English-speaking tour guides and a cable car. The village in return got electricity, new jobs and increased prosperity. When we visited Ping’an Village, the average yearly income was 74 U.S. dollars per year, about 200 yuan, just above the poverty line then set by the Chinese government. Many of the local people were apprehensive about the cultural tradeoffs they would have to make to welcome outsiders into the community, but eager to improve their economic situation. They were right on both counts. Ping’an Village today has electricity, the Internet, television and most of the amenities of modern life. At the same time, the now crowded town has sacrificed some of the age-old charm, serenity and local character that we saw when we visited. It is a story that has played out in rural towns all over the world in recent decades.

This photos in this blog look at the village as it was when we visited it. 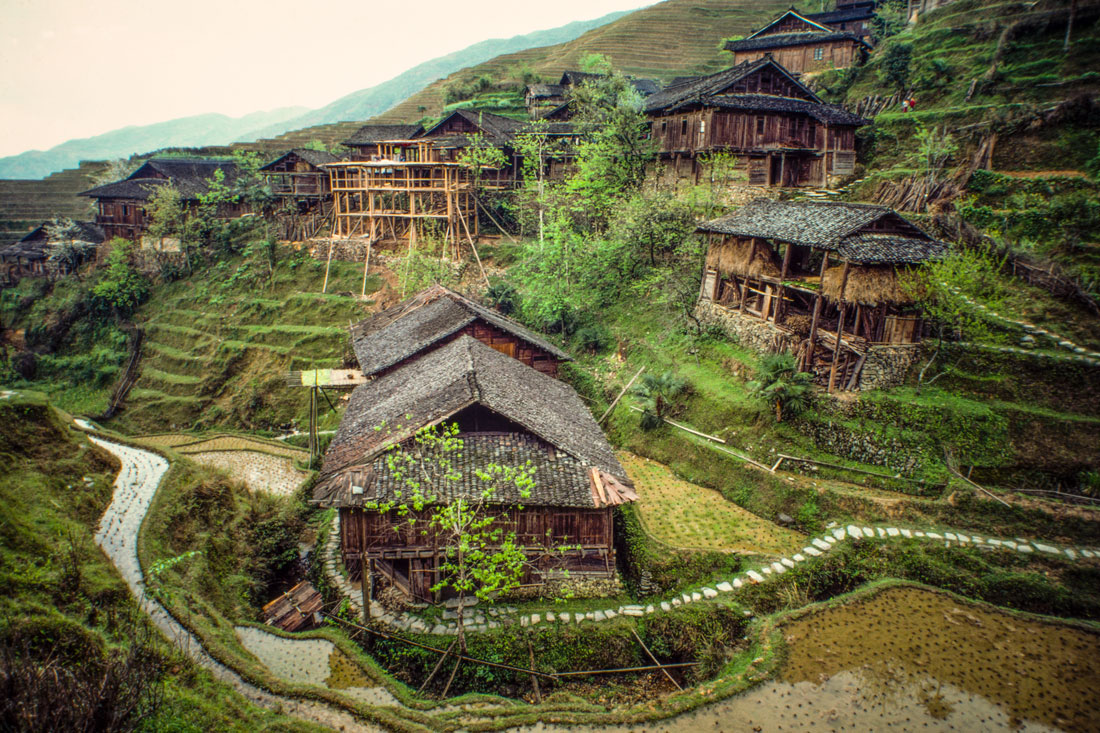 The area around the mountainous village is famous for its terraced rice paddy fields, which are called Longji or Dragon’s Backbone because of the intricate pattern of the terraces that spiral around the steep mountainsides. Longsheng (Dragon Prevails) County, in which Ping’an Village is located, has 21 mountains and 480 streams and rivers. As long ago as the Yuan Dynasty (1271-1368), local people began to terrace the slopes, some of which are so steep that a terrace can have only two or three rows of crops. When the paddies are flooded with water in the spring, they are said  to resemble the shiny scales on the back of a dragon. As the rice grows and matures, the terraces turn to green in summer, and then golden at harvest time in the fall. In the winter when it snows, the fields lie fallow but sometimes are white with snow. The hills look like a giant stairway to heaven, rising up from the river below to the tops of the peaks. 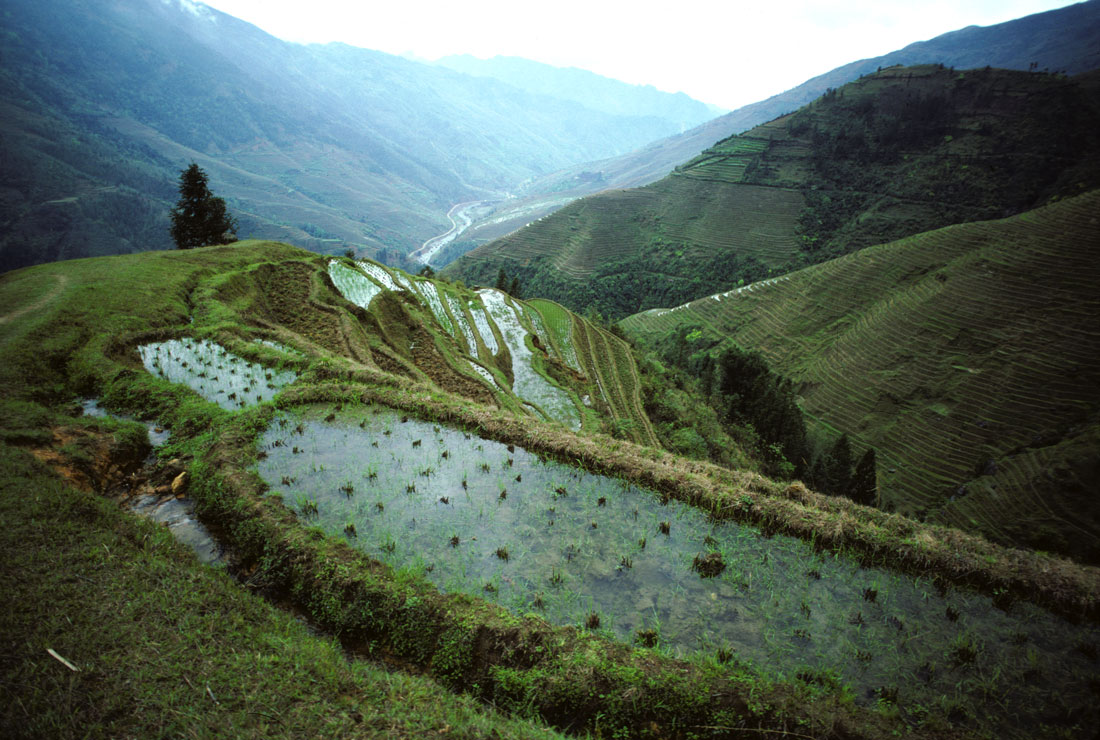 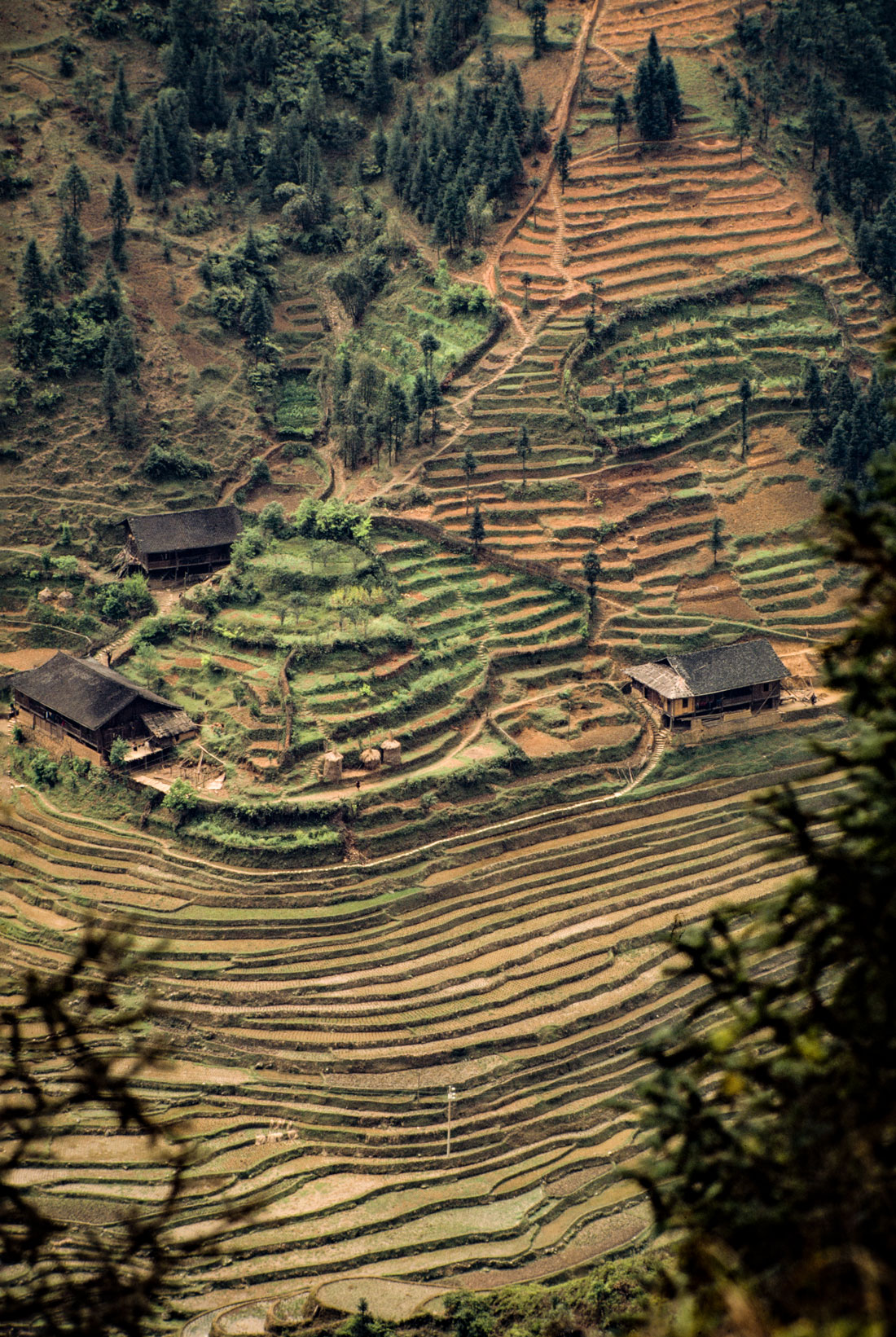 People of Ping’an Village have poetic names for two scenic spots where their terraced fields can be viewed – Seven Stars around the Moon, which has a piece of ground that looks like a bright moon in the rice fields, and Nine Dragons and Five Tigers. This refers to nine ridges that look like nine dragons branching off from each other. There are five tiger-like spots of earth alongside them which are said to guard the village.

When we were there, water buffalo grazed on the terraces and farmers moved from level to level guiding water between flooded rows of plants.  Nimble men, women and children moved up and down the path carrying heavy loads in baskets and in buckets swinging from shoulder poles. They disappeared over a rise and in minutes reappeared several hundred meters higher on the slopes. Down below, miniature cows and farmers moved in the terraces in fields near the river. 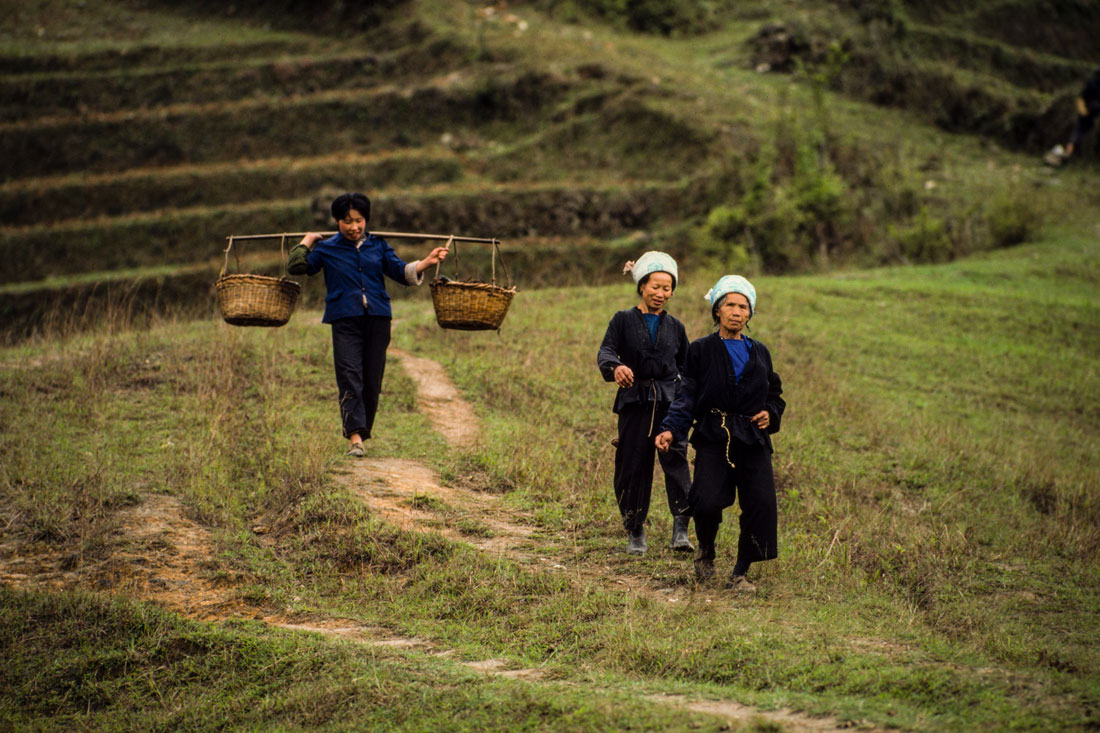 Hand hewn multi-storied cabins clung in clusters to the mountain slopes, chickens scratching in the dirt on the bottom floors where animals were kept. Water-powered stone mills along the many streams ground grain at an agonizingly slow pace. 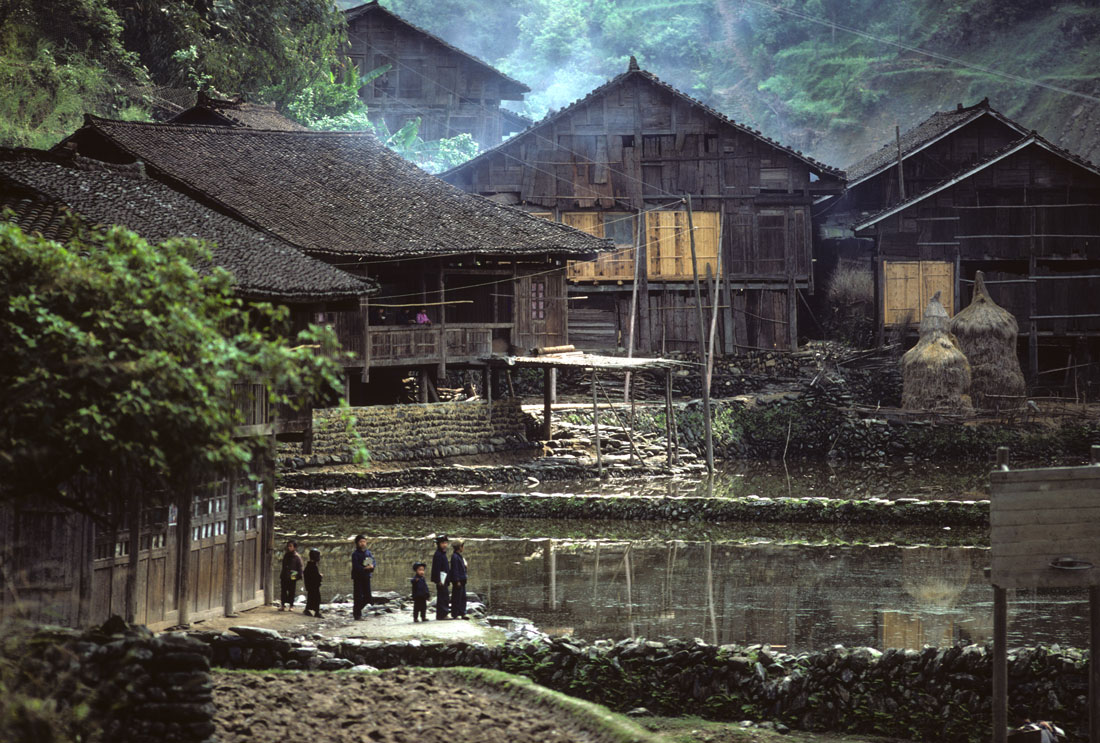 This spectacular scenery is both the bane of farmers and their greatest tourist asset, coinciding with the popular pastimes in China of hiking and of traveling to areas where ethnic minorities live to learn about their customs.

China has 56 official minority ethnic groups, and Longsheng County where Ping’an Village is located has five major minority and four minor ones. It is so ethnically diverse that its official name is Longsheng Various Nationalities Autonomous County.

China’s largest ethnic group is the Zhuang, with 18 million people who mostly live in Guangxi where Longshen County is. Ping’an Village was mostly Zhuang. Most of the residents were named Liao and were interrelated.

Two women in turbans and Zhuang ethnic dress met us in the village and guided us to the village head’s home, where we climbed a wooden staircase to the second floor and stepped into a large high-ceilinged room that was almost empty except for two open cooking fires on stone slabs, a wooden table with stools, a cabinet and an enormous ancestral altar. Despite the fires, the room wasn’t smoky. The smoke rose and exited at either end of the peaked roof. Lanterns hung from a pole and carrots and potatoes were piled in mounds on the floor. 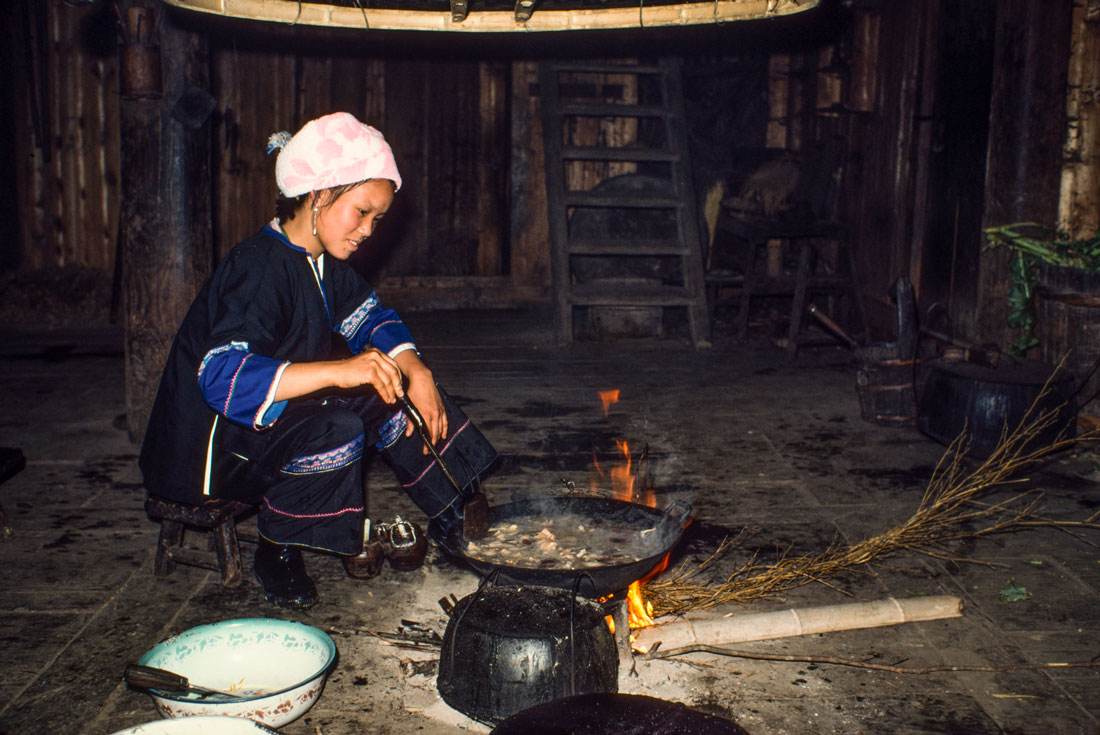 On a bamboo porch outside the kitchen door, a Swiss Family Robinson-style plumbing system brought water to a wooden bucket through bamboo poles split in half and propped up on sticks. The poles were connected to a stream above the house. Surplus water sloshed over the brim of the bucket and down through the bamboo slats of the porch into the stream from which it came, providing the residents of the house with a continuously running supply of water. 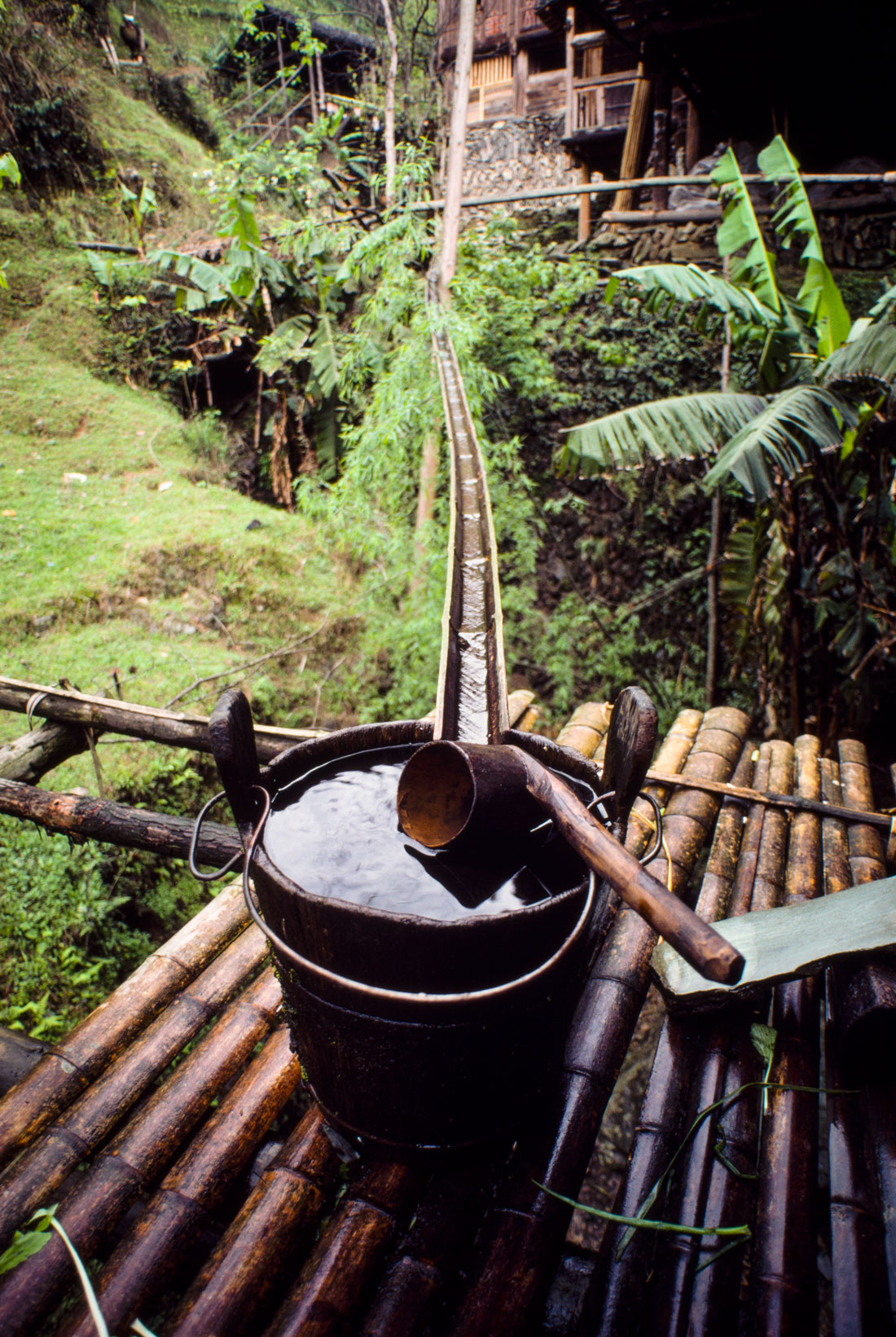 A woman squatted on the porch, using the water to wash vegetables in a wooden wash pan. 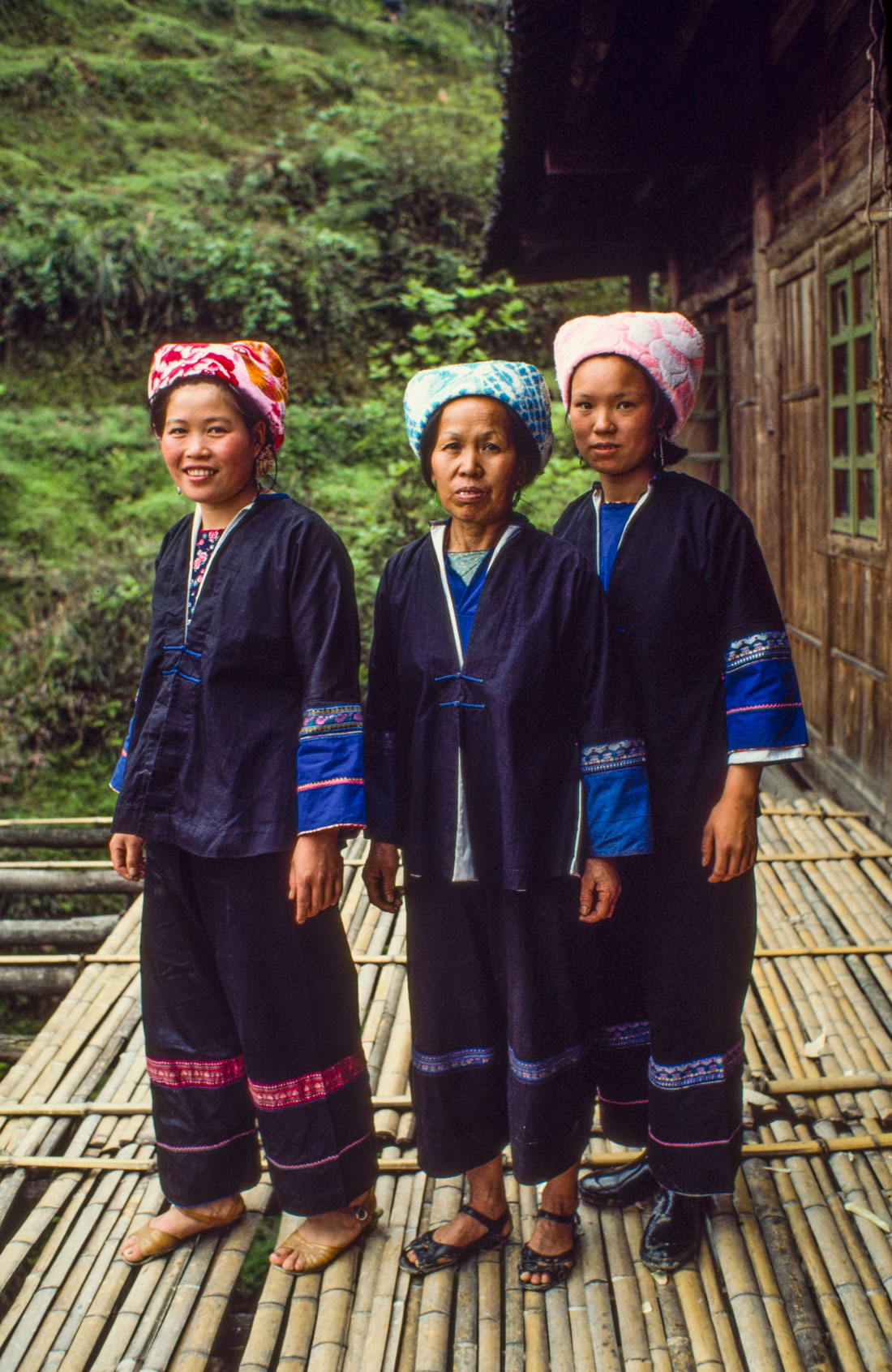 After chatting with the village head and other local people and enjoying a stew cooked on the fire, we headed back down the mountain. Curious children gathered to watch us outside the log school, where five teachers educated children up to the eighth grade. 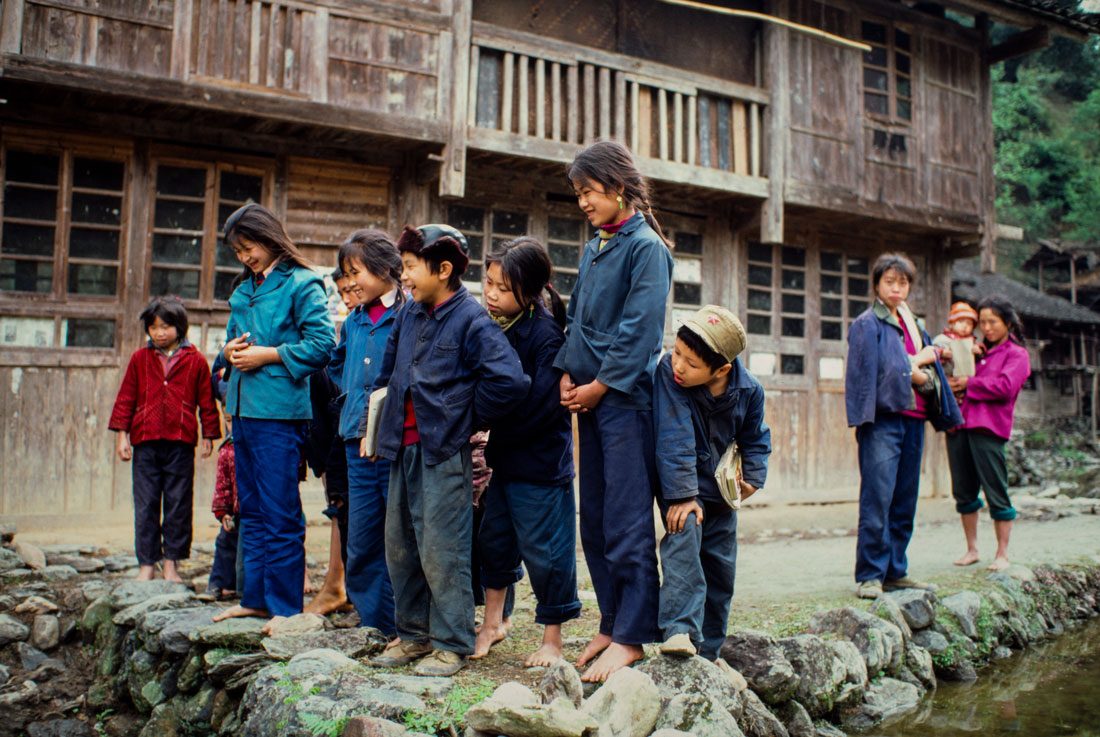 We slipped and slid back down the path, stopping to photograph men building a new cabin with hand tools in another village. 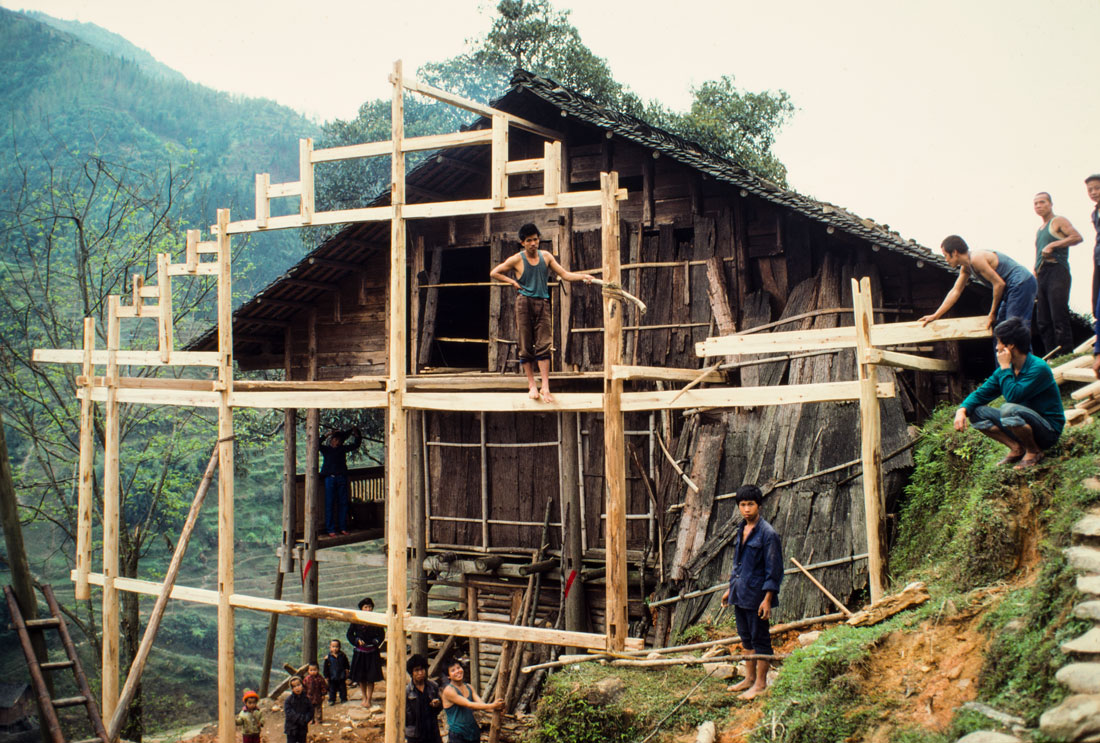 At the bottom of the mountain, we took off our shoes and crossed the river on stepping stones instead of hiking on a bridge. This area was former Communist revolutionary territory. Members of the Communist Long March had gone through it in 1935, and former Chinese leader Deng Xiaoping had once led an uprising in the mountains of Guangxi as a young communist revolutionary. He was fond of saying that developing China was feeling its way across the stream on stepping stones. Whenever I heard that saying after that, I thought of our slippery, treacherous path across the stones in that river below Ping’an Village. 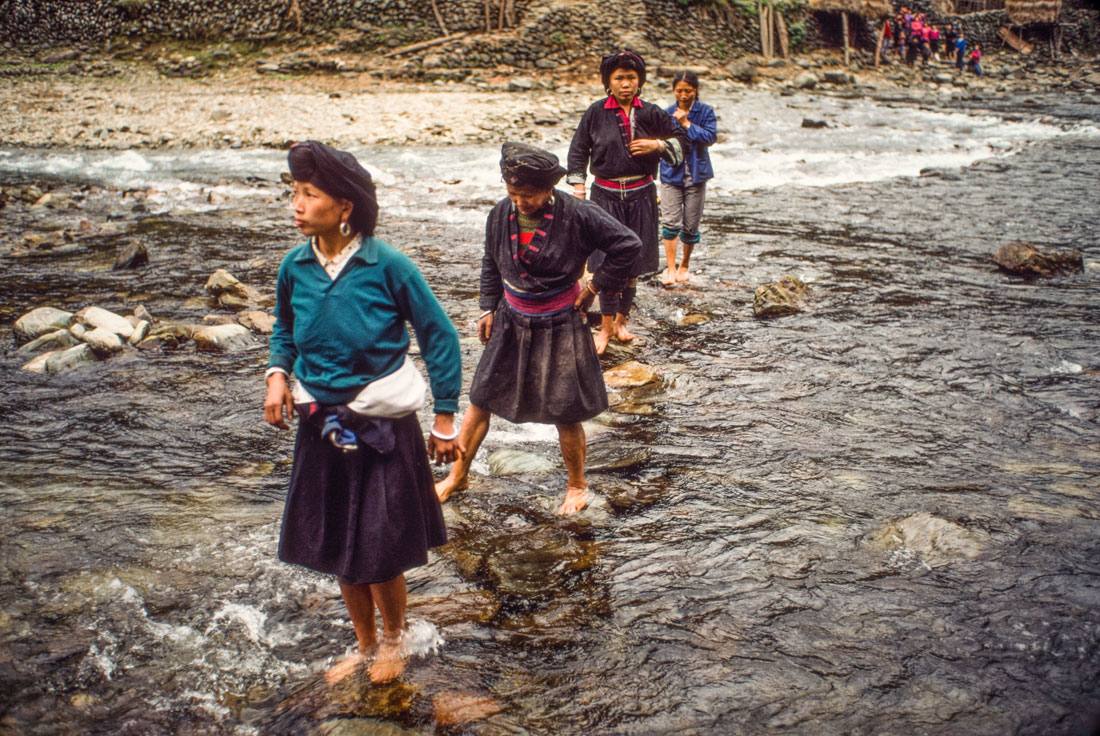 The first road into Longsheng County was built into the area in 1968. There is now a north-south highway that goes through the area from Guilin. From the country seat of Longsheng, tourists can take a shuttle bus to a parking lot from which they can hike to Ping’an Village and from there to other villages.

Entrance to the terrace fields is now controlled by a ticket office run by tour operators in cooperation with the local government. Villagers upset by profits not being shared with the local community once staged a protest by delaying and in some cases refusing to flood the terraces with water on schedule to create the beautiful mirrored landscape that enchants tourists. Tourists also can rent a sedan chair in which villagers carry them up. Viewing platforms have been constructed for tourists to rest and take photos.

Another group that lives in the area of Ping’an Village is the Yao ethnic group. Yao women are famous for having long hair, which they wrap in a bun on top of their heads so it looks like a turban. They will unwrap their hair and pose for a photo for a fee. In addition to their own dialects, the minority villagers speak Mandarin and some speak English. 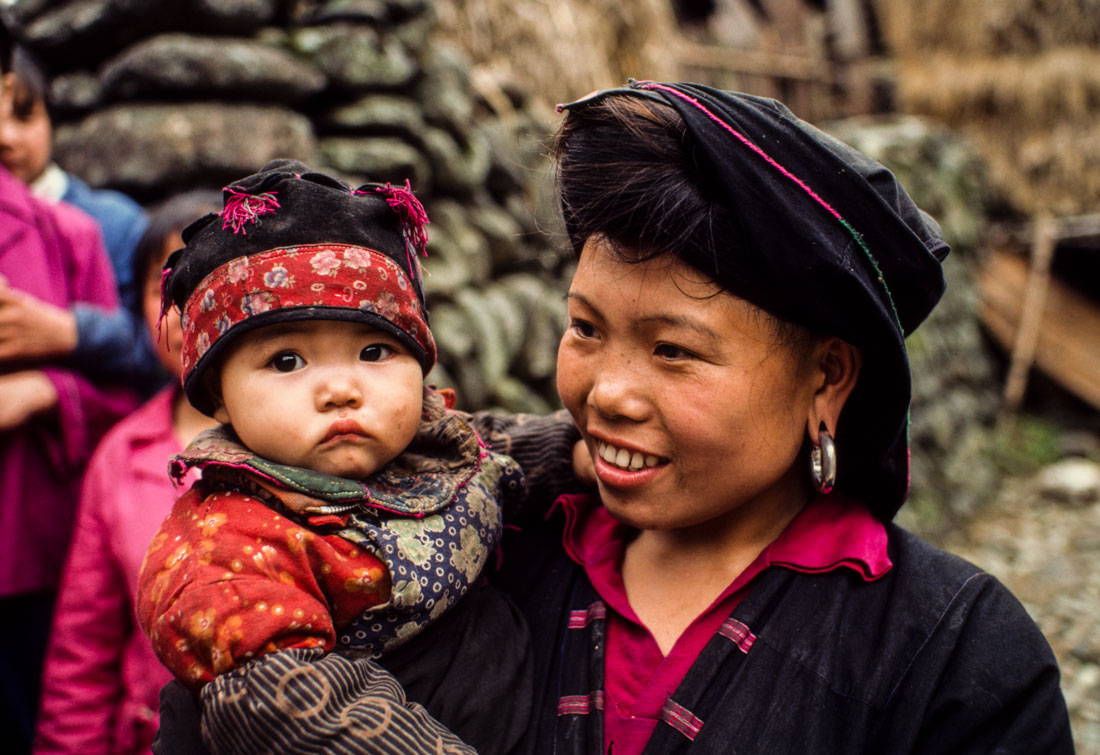 Tourists often are fed a local specialty, rice stuffed in the hollow core of bamboo along with meat, vegetables and spices. The bamboo tube is sealed and placed on the fire to cook. The local people also make rice wine, reputed to have a low alcohol percentage. We didn’t drink any, but can testify that it’s sufficiently potent because the county functionary who accompanied us became so tipsy that we feared he wouldn’t make it off the mountain without pitching headfirst into a flooded rice terrace.

The county’s other claim to fame is a hot spring that is claimed to have more than ten kinds of beneficial microelements, and we had a nice soak in it when we were there. Chinese use its mineral water for both medicine and drinking. The hot springs lies within a national Forest park. The county also has a large subtropical evergreen broad-leaf forest with waterfalls, and a famous natural meadow.

The Zhuang ethnic group mainly lives in the Guangxi Zhuang Autonomous Region. Their name is controversial because it originally was written with a perjorative Chinese character meaning “wild dog,” an ethnic slur.  The character later was modified with another dubious meaning, of “child” or “boy servant.” Later the name was changed to a completely different character meaning “strong, robust.”

Some ethnologists believe that the Zhuang culture is not enough different from that of the majority Han Chinese to justify recognizing the Zhuang as a separate ethnic identity. Many Zhuang considered themselves Han Chinese before being designated Zhuang by the Communist government and some insisted that they had used the Chinese written script for more than a millennium to write the Zhuang language. They resented using a Romanized Zhuang script in Cyrillic letters that was introduced in 1957. In 1982, the Cyrillic letters were abandoned for Latin ones, but Chinese characters still are used to write Zhuang in informal settings. Zhuang people who speak different dialects use Chinese as the lingua franca to communicate with each other.

Traditionally, the Zhuang people have an animistic religion called Shigongism or Moism, which includes ancestor worship, sutras and professional priests who use chicken bones for divination. The religion sees all things as composed from heaven, earth and water. Some Zhuang also are Buddhist, Taoist or Christian.

Sour, salty dishes, especially pickled vegetables, pork and dried fish, are common foods  among the Zhuang as is a drink made from tea leaves fried in oil with rice grains and brewed.

The Zhuang languages have been variously placed with Sino-Tibetan, Tai and Austronesian languages. Genetic analysis places the Zhuang with Austro-Asiatic people. Their origins in Guangxi have been traced back to the Paleolithic period. The earliest historical records of the Zhuang are rock paintings, which date from the Warring States Period (475-221 B.C.)

Guangxi was colonized by Han Chinese as early as the second century B.C., although the Zhuang joined other kingdoms in fighting against the Chinese empire at various times. Sometimes Chinese emperors played the Zhuang and other minority groups off against each other. In the 19th century, the Guangxi region was in a state of constant unrest. The Second Opium War was sparked by officials in Guangxi executing a French missionary in 1858.