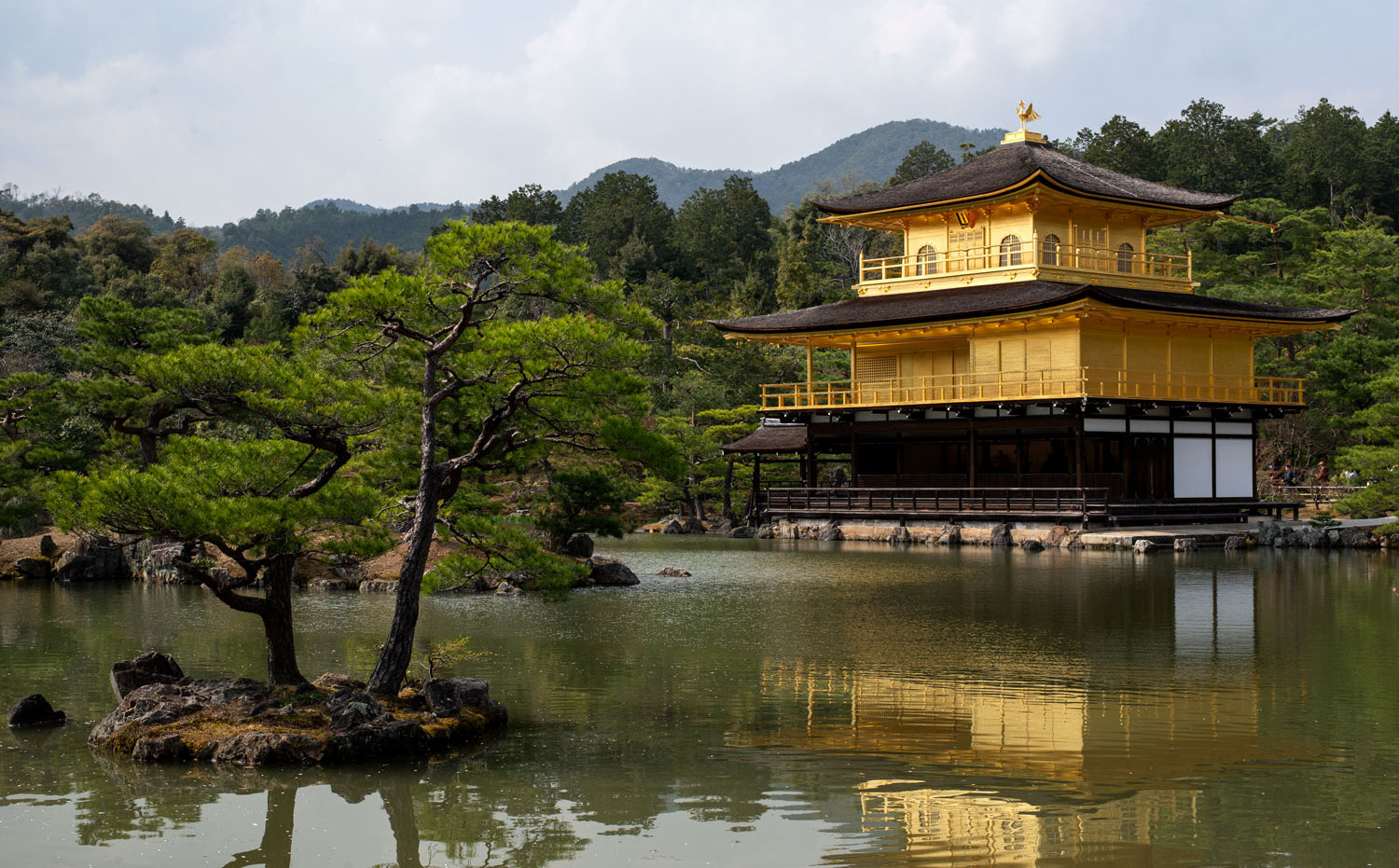 Japanese design is renowned for its simplicity and restrained emphasis on rusticity, but the culture also has an enduring opulent streak.

The two impulses come together at Kinkakuji, one of Japan’s most popular landmarks. The gold-clad Golden Pavilion is the most famous symbol of the old imperial capital of Kyoto and the best evidence of the enduring appeal of gold in the country that is hosting the Summer Olympics.

Because of a state emergency declared this week amid a COVID-19 surge in Japan, the country is closed to foreign tourists and fans won’t be able to attend Olympic events in person. In non-pandemic years, however, Kyoto is Japan’s top tourist city, with 2,000 gardens that are crowded with visitors from all over the world. None is more popular than Kinkakuji, where tourists line up to photograph the gleaming pavilion reflecting in a garden pond.

Kinkakuji has a long history. It was originally the villa of a clan that lost power when the Ashikaga clan founded the Muromachi government in 1336. The powerful shogun Ashikaga Yoshimitsu unified Japan’s northern and southern courts in 1392.  He then nominally retired while holding onto the reins of power from the villa, which he made into his retirement retreat in 1397. Under his ownership, the site became a political center that hosted influential visitors including the Japanese emperor until Yoshimitsu’s death in 1408.

In accordance with the terms of his will, the complex was converted to a Buddhist temple after his death.

The centerpiece of the garden complex is the pavilion, the top two floors of which are faced with gold leaf that shimmers in the sunlight. The pavilion reflects in the adjacent pond, creating one of the most loved and photographed landscape scenes in Japan. Visitors flock to the temple in all seasons to take photos of the shimmering building against backdrops of spring blossoms, snow, the green of summer and colorful autumn foliage. 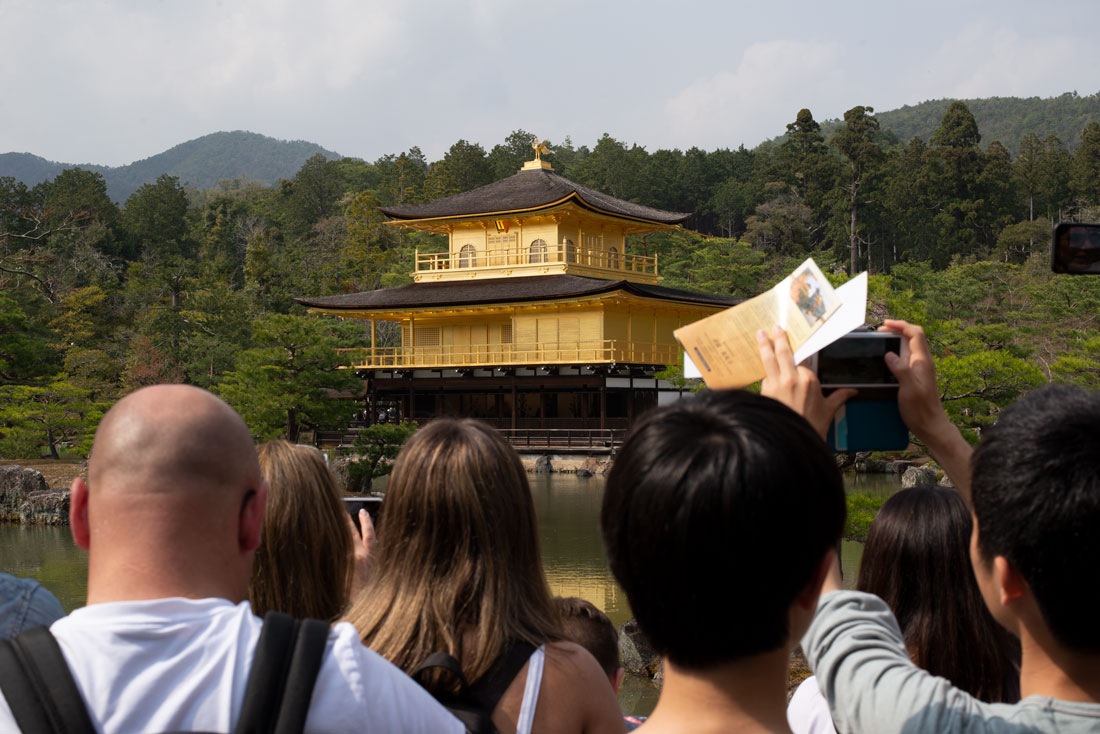 It’s easy to jump to the conclusion that the shogun was a showoff who was trying to impress his own important visitors with his wealth and power. Fair enough, but he also had deeper motivations.

He intended to donate the villa as a Buddhist temple, looking ahead to collecting merit that would pave the way for his comfort in the next life.

Gold is a symbol of purification from pollution, negative thoughts and feelings about death in Buddhism because of the refining process associated with the metal. The golden pavilion is a clear reference to the Buddhist Pure Land paradise, which was envisioned as a garden with golden and silver pavilions.

Scholar monk Kukai (774-835) famously said: "There are no fixed heavens and hells. If you do good, gold and silver pavilions immediately appear."

The aging shogun clearly saw the estate as a transitional space into the next life.

The shogun’s era was characterized by opulent extravagance among the aristocratic class. Ashikaga Yoshimitsu was a patron of the arts, including sword-making, ceramics and Noh theater which all came to be called the Kitiyama culture. The Kitiyama culture was an outgrowth of the earlier Heian period (794-1185) when Japanese aristocrats wore elaborate multilayered silk robes and lived in sumptuous elegance, influenced by ties with the glittering Tang dynasty of China. On and off since then, Japanese aristocrats have used luxurious objects and clothing to convey their elite status. The term karei, or flowery beauty, was used to connote elaborate clothing, gold leafed and lacquered objects and complex court rituals that are part of this tradition. Karei persists in imperial court and public festivals today, especially ones celebrated in Kyoto, the old imperial capital, that recreate ancient court life.

In contrast, restrained rusticated elegance epitomized by rustic tea house architecture rose to the fore as the luxurious lifestyle of elites became a focus of discontent during the civil war called the Onin War (1467-1477). The simple rustic style became the predominant Japanese aesthetic and the one that Japan has exported worldwide. The two artistic strains continue to permeate Japanese design today, with the general austerity of Japanese design punctuated with colorful bursts of exuberant and finely crafted elegance.

Kinkakuji is the most prominent example of the Kitiyama style. The building has both a luxurious facade and simplicity of line – a combination of aristocratic culture in the past Heian Period and the emerging samurai culture. The building also is influenced by Ming dynasty architecture and other architecture from countries on the Asian continent.

The shogun did not live to see the building gleaming in the sun, as the gold leaf was only partially installed when he died. Other than the gold leaf that covers the exterior of the pavilion’s top two floors, the building’s design is restrained and in accordance with that of other Japanese temples. In this sense, it is consistent with the Japanese aesthetic in which a general preference for the simple and natural is balanced with touches of splendor. 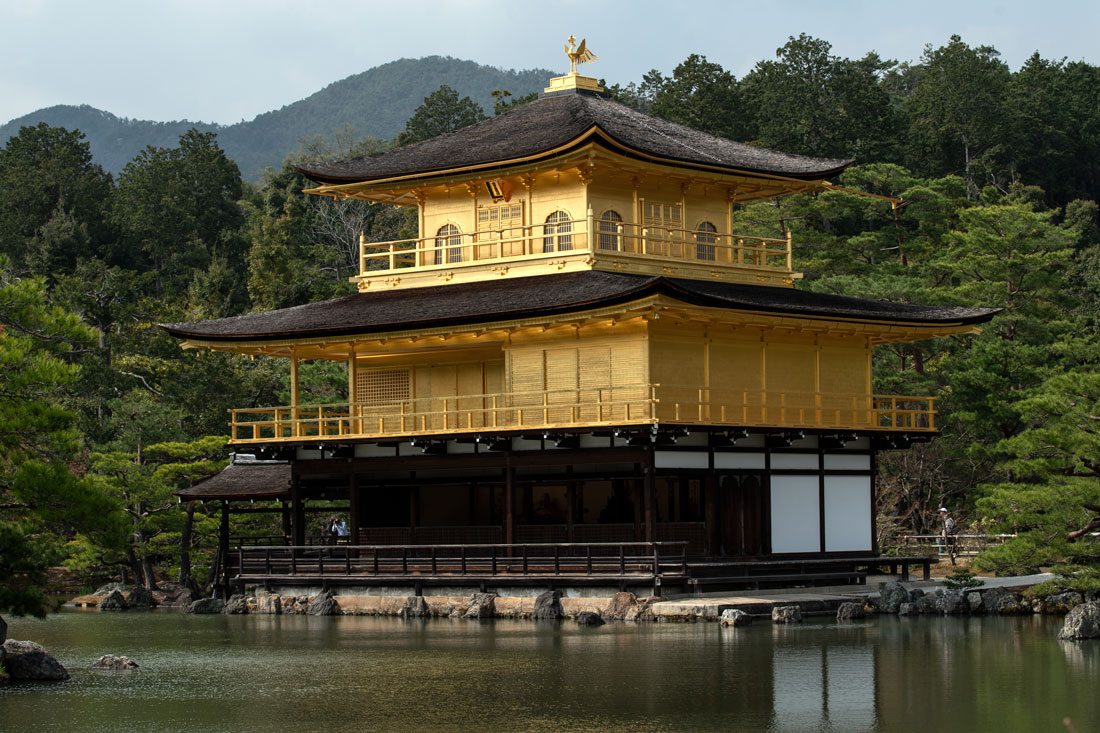 The building is a mixture of three Japanese architectural styles. The temple’s first floor is in the Shinden style used for palaces during the Heian period, which was characterized by natural wood pillars and white plaster walls. Statues of the historical Buddha and Yoshimitsu as a priest are on this floor. There is a front area for viewing the garden’s scenery, a veranda, and a rear fishing deck on this floor. 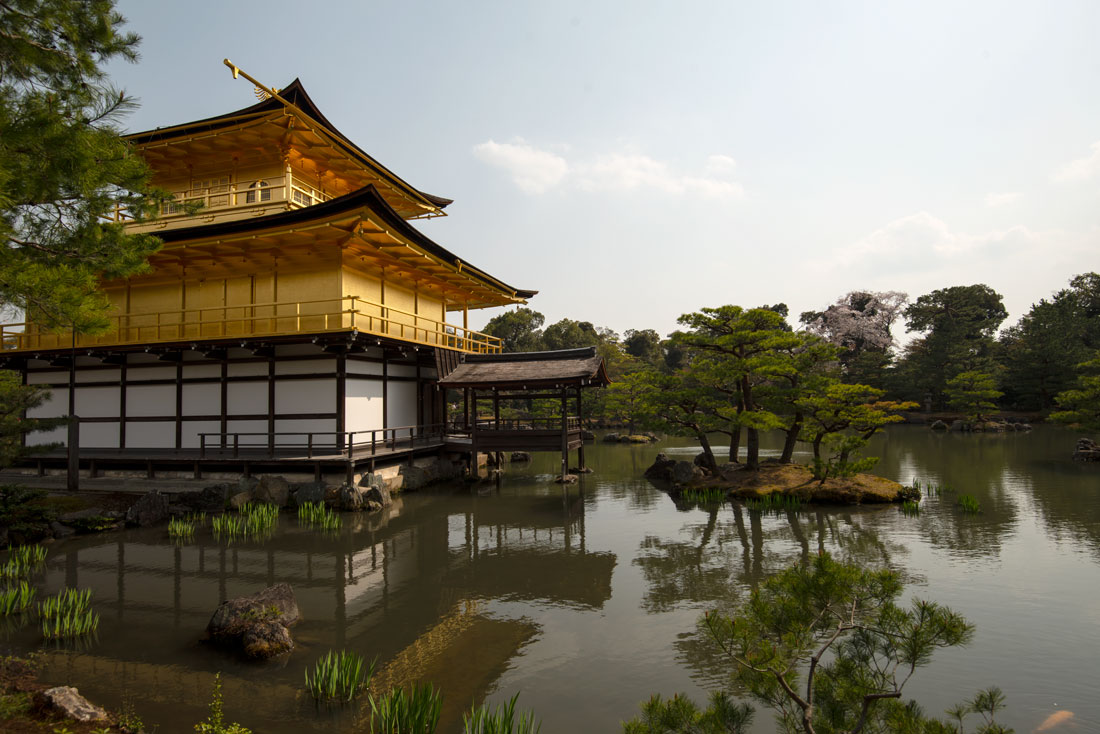 The second floor is in a restrained practical style used in samarai residences and houses Buddhist statues of Kanon, the bodhisattva of mercy and compassion, and the Four Heavenly Kings of Buddhism. The ceiling and walls are decorated with painted birds, clouds, and musical instruments.

The third floor is in the style of a Chinese Zen hall, and is gilded not just on the exterior but the interior. It has bell-shaped windows typical of Zen architecture. The floor houses ashes of the Buddha. The pavilion’s interior is not open to the public, but a beautiful view of Mt. Kinugasa reportedly can be seen from it. 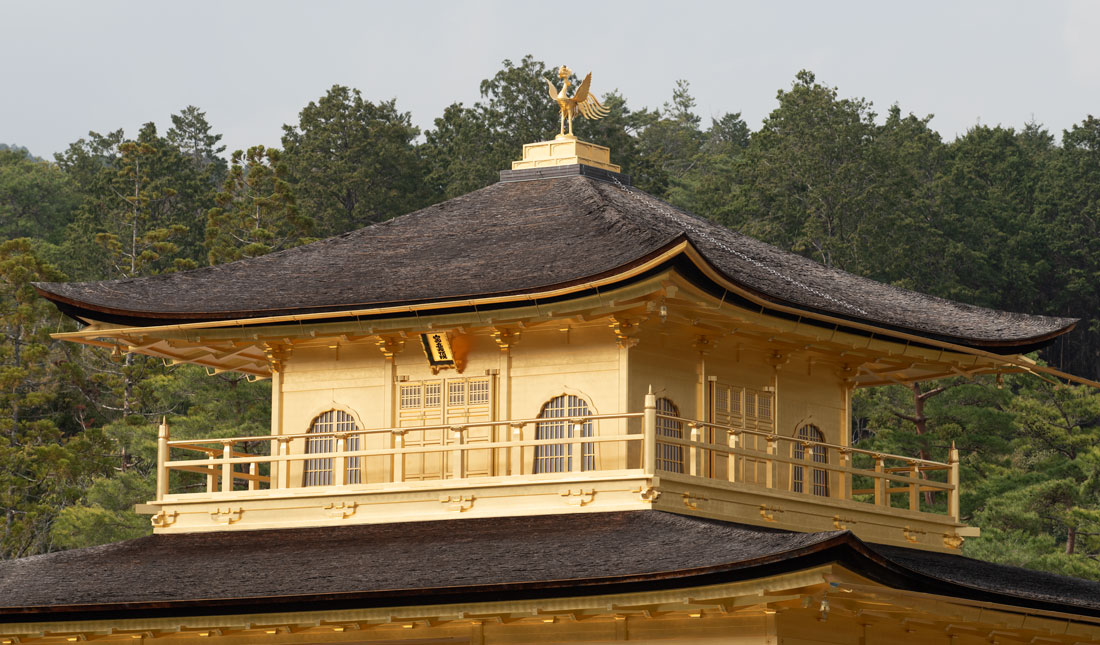 Kinkakuji has a history of dramatic ups and downs. It is the only remaining building from Yoshimitsu’s garden, as the others were all destroyed in the Onin Wars that demolished much of Kyoto. However, the current pavilion isn’t original. It burned twice in the Onin Wars and was rebuilt.

The temple was influential in the 16th century, with its chief priest being an advisor to Hideyoshi Toyotomi, the second great unifier of Japan, and Ieyasu Tokugawa, the founder of the Tokugawa government. However, the pavilion burned in a fire in 1565 and was not rebuilt again until the 19th century. In the late 19th century as Japan modernized, the government withdrew patronage of Buddhist temples. The temple monks opened the temple to the public and started charging admission fees, creating one of Japan’s most popular tourist sites.

A distraught apprentice monk/college student at the temple burned the pavilion down again in 1950. He then went up on a mountain behind the temple and poisoned himself in a suicide attempt. He was discovered by police, saved by emergency medical care and sentenced to seven years in prison. The root of his distress apparently was his speech impediment and his mother’s high expectations for him. After the Kyoto police called her in to tell her what her son had done, she jumped off a train and killed herself on the way home. The monk contracted tuberculosis and suffered from mental disorders in prison. He was transferred to a hospital where he died in 1956.

Only fragments of charred wooden timbers remained from the fire. Businesses and the government donated the money to rebuild the Kinkakuji pavilion in splendor in 1955. It retains the original design from Yoshimitsu’s era, and was rebuilt using a 19th century detailed drawing that was made while repairs were being done.

Like many Asian historical landmarks which are perishable because they are constructed of wood, the idea, legend and craft skills used in building the pavilion are ancient rather than the actual physical building.

There is some question whether the building was historically as golden as it is now. An 1885 photo of it shows it as worn wood, with the gold peeling off and little evidence of the gleaming surface that now covers it. However, it once may have been even more splendid – the roof tiles are made of hinoki wood but at one point were gilded tile.

Gold leaf is gold manufactured through an ancient method called gold beating of pounding gold of different karats and darker and lighter shades into panels of thin metal about 4 millionths of an inch thick.  The building was recoated with gold in the 1980s with a thicker coating than the 1955 gold layer and the building’s interior, including painting and Yoshimitsu’s statue, was restored. The roof was restored in 2003.

The bronze phoenix figure atop the temple is pre-1950. It survived the 1950 fire because it had been removed for repairs. The phoenix is a symbol of divine favor, virtue, and harmony. 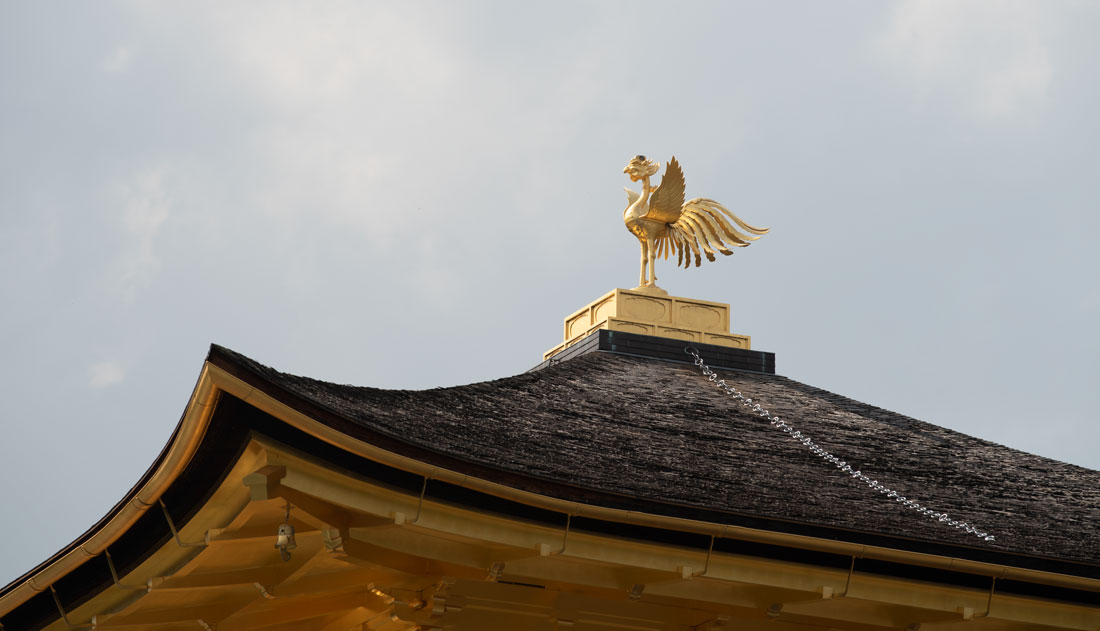 The gardens and pine woods at Kinkakuji are a prominent example of gardens of the Muromachi period (1333-1573). Not just the building but also the surrounding garden were designed to represent the Buddhist Western paradise and to express the blending and harmony of heaven and earth. Winding paths allow visitors to view landscape scenes that imitate famous landscapes from Japanese and Chinese literature and art.

Four stones in the garden’s Kyokochi Pond represent four boats sailing off to the mythical isle of eternal life. The larger of the temple’s two ponds has ten islands, the largest representing Japan.

A rustic teahouse called the Sekkatei teahouse was added to the garden during the Edo Period (1603-1868). 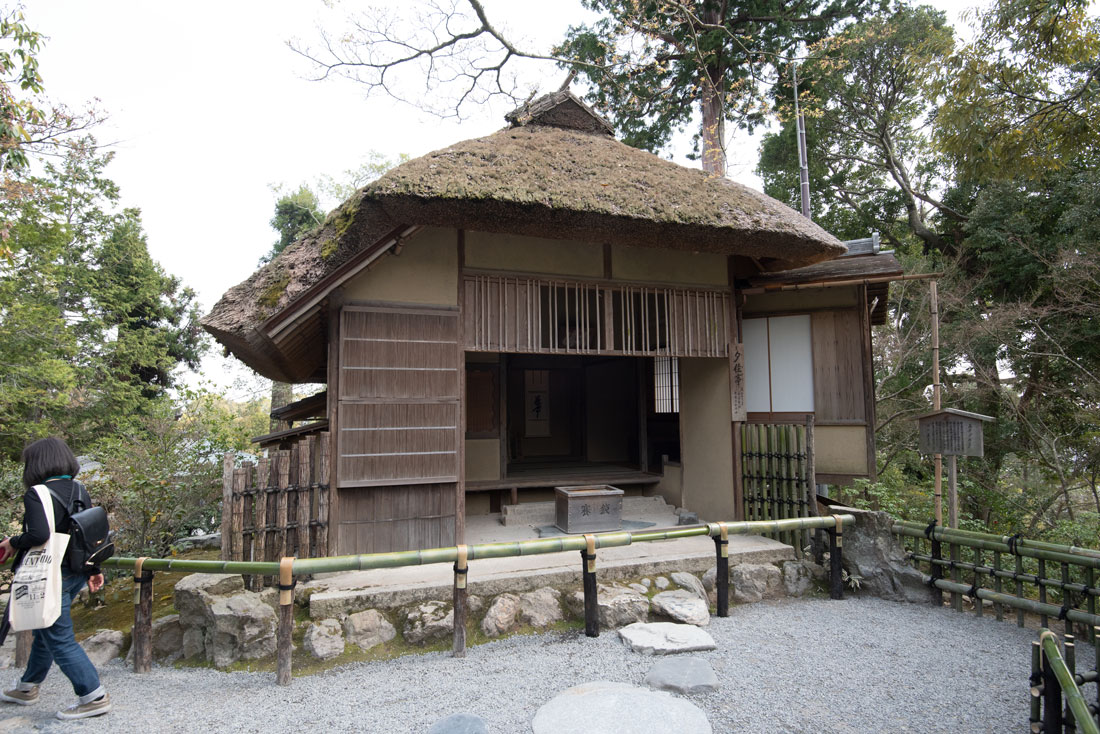 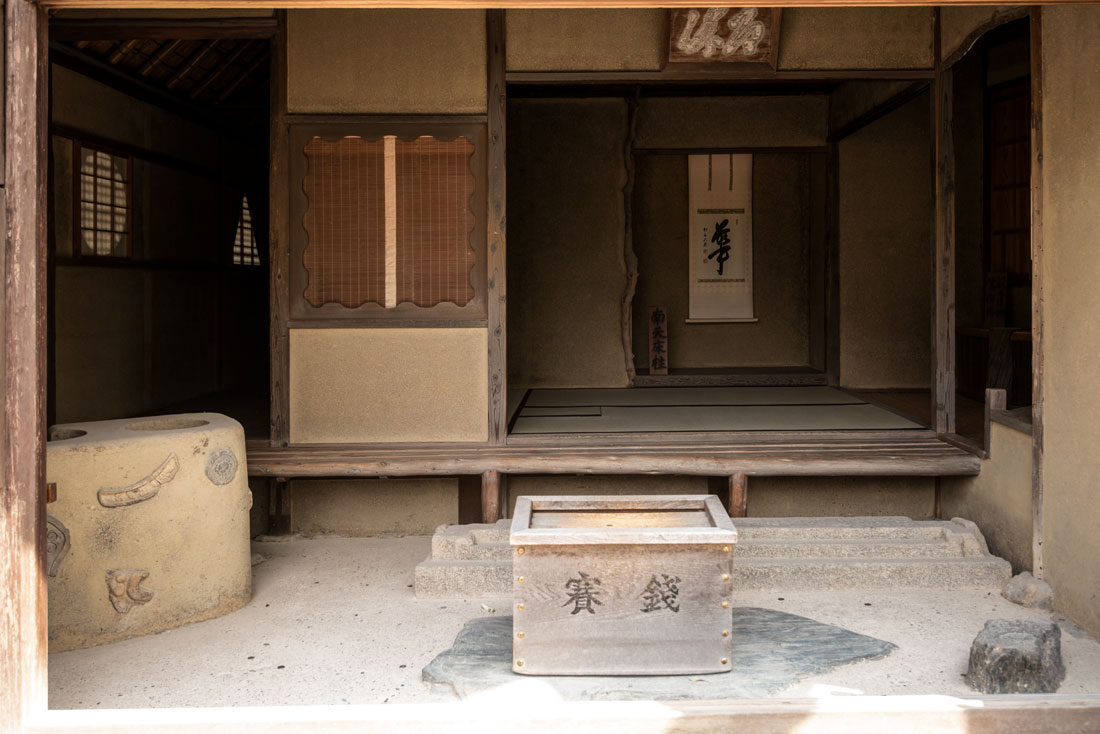 Two fresh water springs feed the ponds used in tea ceremonies at the site. One, the Ryumon Taki or Carp Rock, has a large pointed stone on which water falls. It represents a carp in a Chinese myth that tries to climb a waterfall to become a dragon. The legend is a metaphor for a monk's struggle to achieve enlightenment.

Many decorative stones in the gardens have been donated to the garden.

The garden also has an abbot’s residence and a temple hall containing a 9th century statue of Fudo-myo, a Buddhist diety and protector of shrines and temples.

Kinkakuji was the inspiration for another pavilion in Kyoto called the Silver Pavilion or Ginkakuji that Yoshimitsu’s grandson Ashikaga Yoshimasa built at his own retirement estate in 1460. The Silver Pavilion, however, has no silver on its exterior. Yoshimasa intended to clad it in silver, but that never happened. By then, the ostentatious culture of Yoshimasa’s grandfather had faded, and wabi-sabi simplicity was in. The Onin War raged while Yoshimasa lived at his estate.