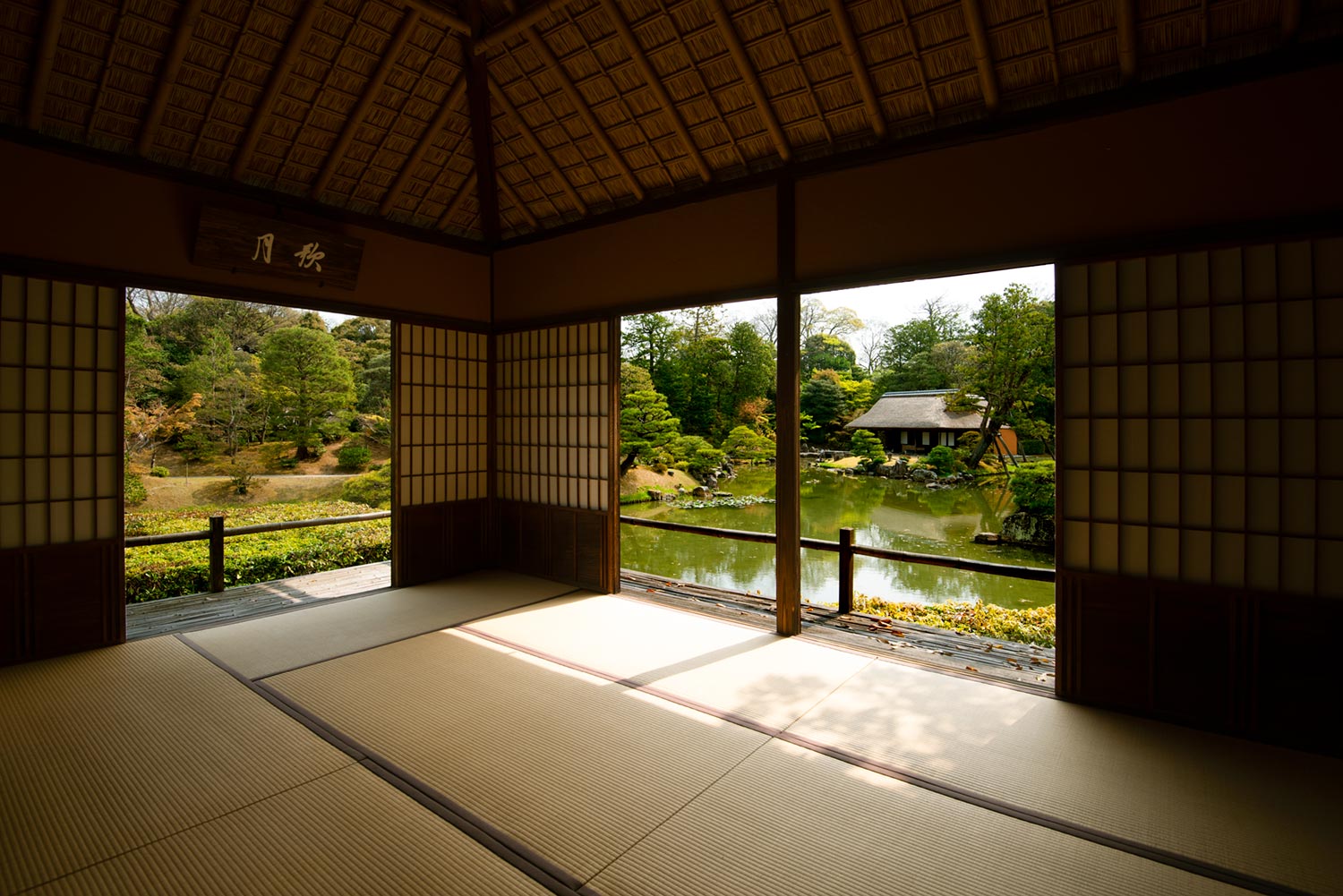 Japanese Prince Hachijō Toshihito (1579-1629) was so fond of reading The Tale of Genji, the classic Japanese novel  about the son of an ancient emperor, that he wanted to live in it.

He spent hours copying passages from the novel, including this one: “Far away, in the country village of Katsura, the reflection of the moon upon the water is clear and tranquil.”

The prince, the adopted son of the great Japanese daimyo Toyotomi Hideyoshi, obtained land along the south bank of the Katsura River, the novel's location, and began to construct a garden villa modeled on passages from it. He had a pond dug, hills formed and the villa built. It was considered to have one of the finest scenic views in Japan.

The villa and gardens alternatively expanded and deteriorated depending on the fortunes of the prince’s descendants until his line died out in 1881 and the Imperial Household Agency took control of it. Today, it is considered one of Japan’s chief cultural treasures and among the greatest masterpieces of Japanese architecture and gardens. 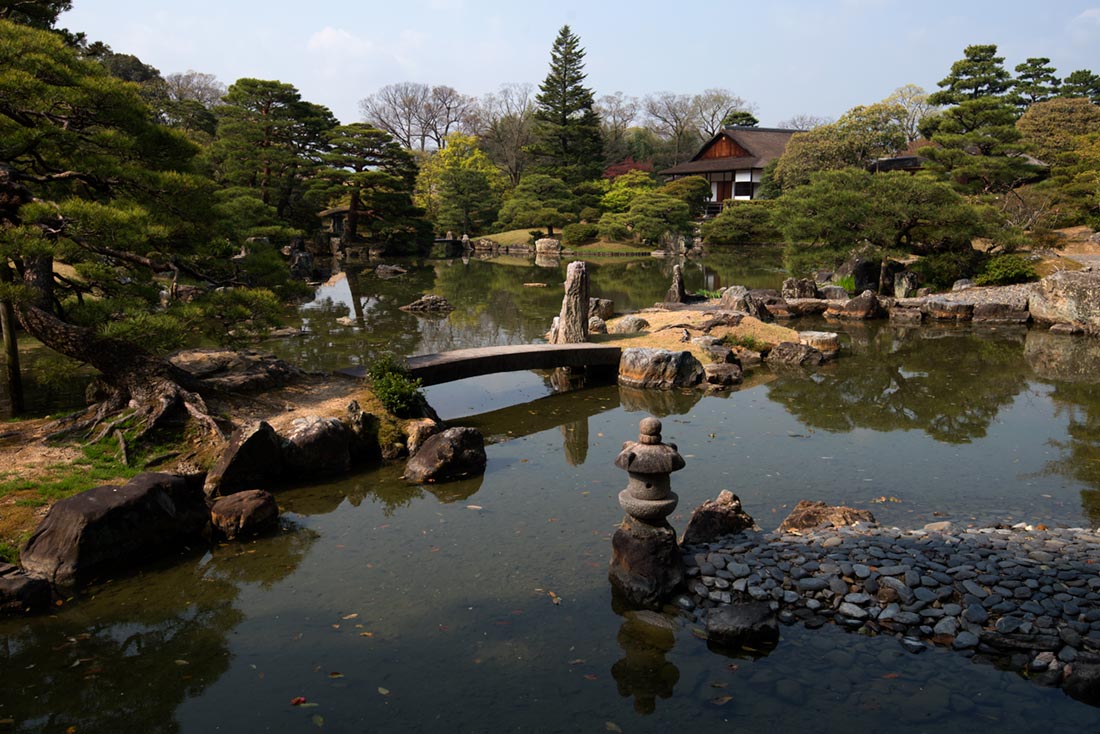 The pond and a palace at Katsura Villa.

Three palaces, five teahouses (of which one is no longer extant) and a strolling garden were built around a labyrinthine pond. Visitors are allowed in by appointment only and led through the immaculate garden by a guide followed by a stern security official who makes sure that visitors don’t stray off the paths or disturb the nearby gravel and plants.

The Old Shoin palace was built by Prince Toshihito, probably for large crowds gathered for such activities as viewing the moon. The Middle Shoin has traditional Japanese ornamental shelves, a tokonoma or small decorative alcove that is another hallmark of Japanese design, and ink landscape paintings with cultural significance. This is believed to have been the prince’s living quarters. The New Palace has a large roof and a veranda enclosed by wooden shutters, a bedchamber, a consort’s dressing room and other living facilities. The buildings are beautiful and simple, devoid of free-standing furniture but with built-in cupboards and nooks. 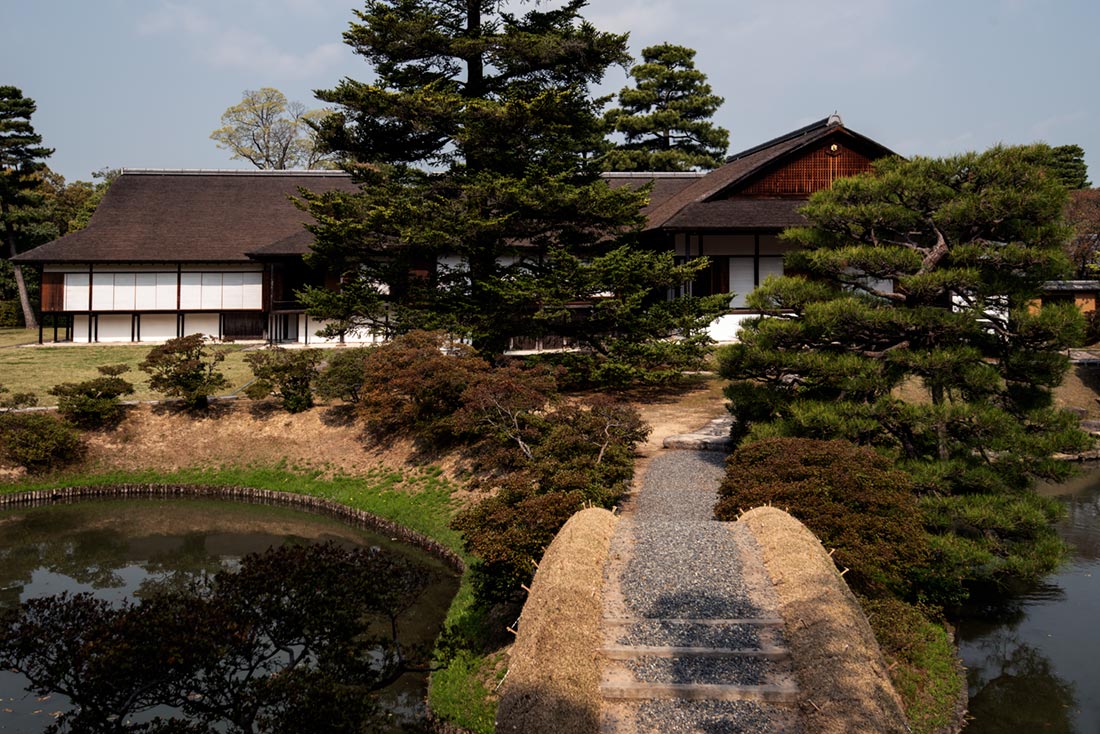 One of three palaces at the villa.

The tea ceremony performed at the teahouses is a spiritual ritual symbolizing perfection in the Zen Buddhist tradition. The architecture and landscape is an important part of the ritual. The villa’s teahouses were built to express harmony, reverence, purity and isolation. Each are located in nature away from the main buildings. A visitor takes a path that doesn't reveal the teahouse until the last moment. The teahouses are rustic, with bark covered wooden supports and irregular shaped wood as extensions of the natural world, as the ceremony is intended to combine the natural and spiritual. The windows and openings in the teahouses are at eye level when sitting so that one can feel closer to nature and admire cherry blossoms in the spring and red leaves in the fall while preparing tea and eating delicacies. The goal of the teahouses was to promote reflection that would achieve inner spirituality and tranquility. 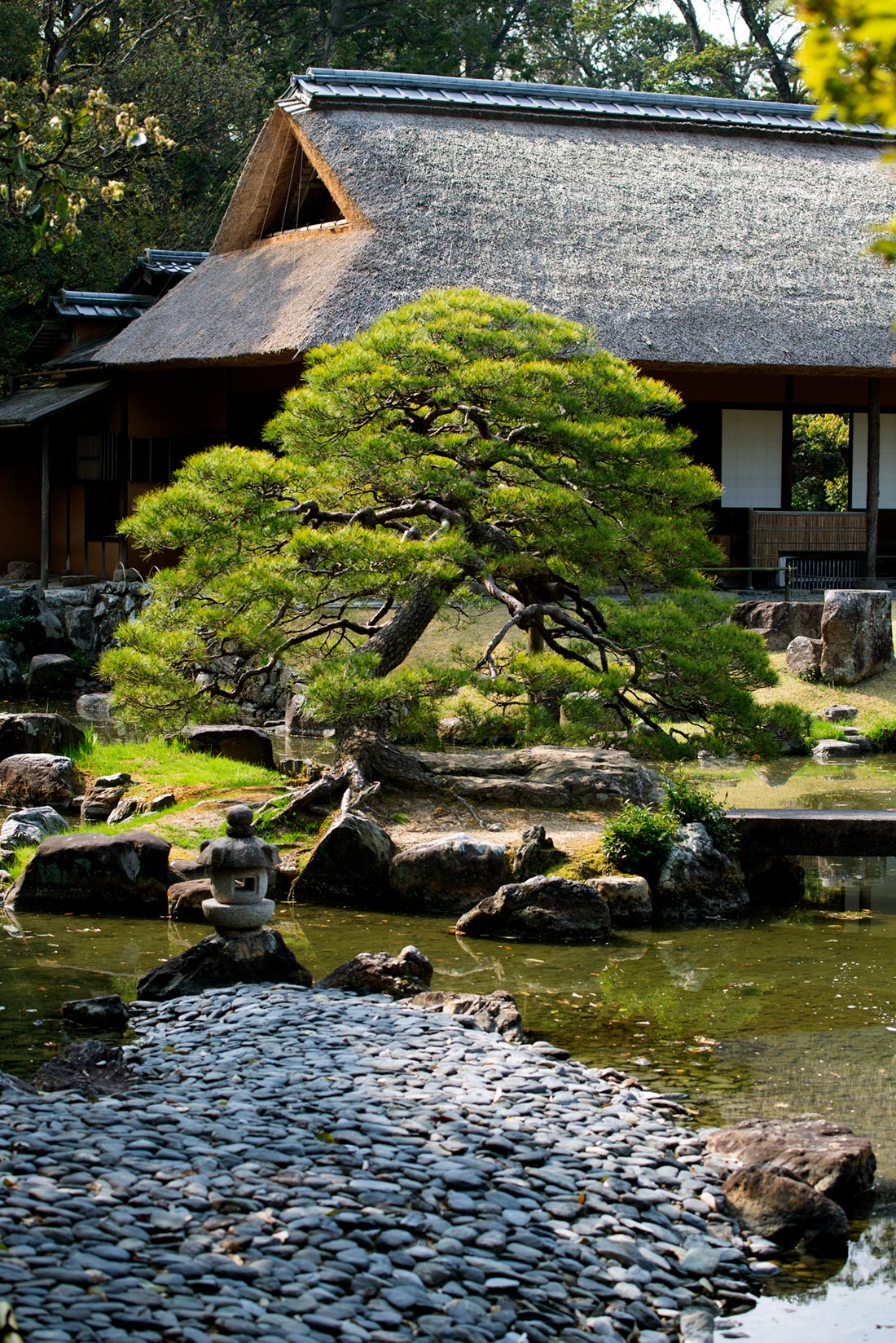 A thatched roof building along the edge of the pond. 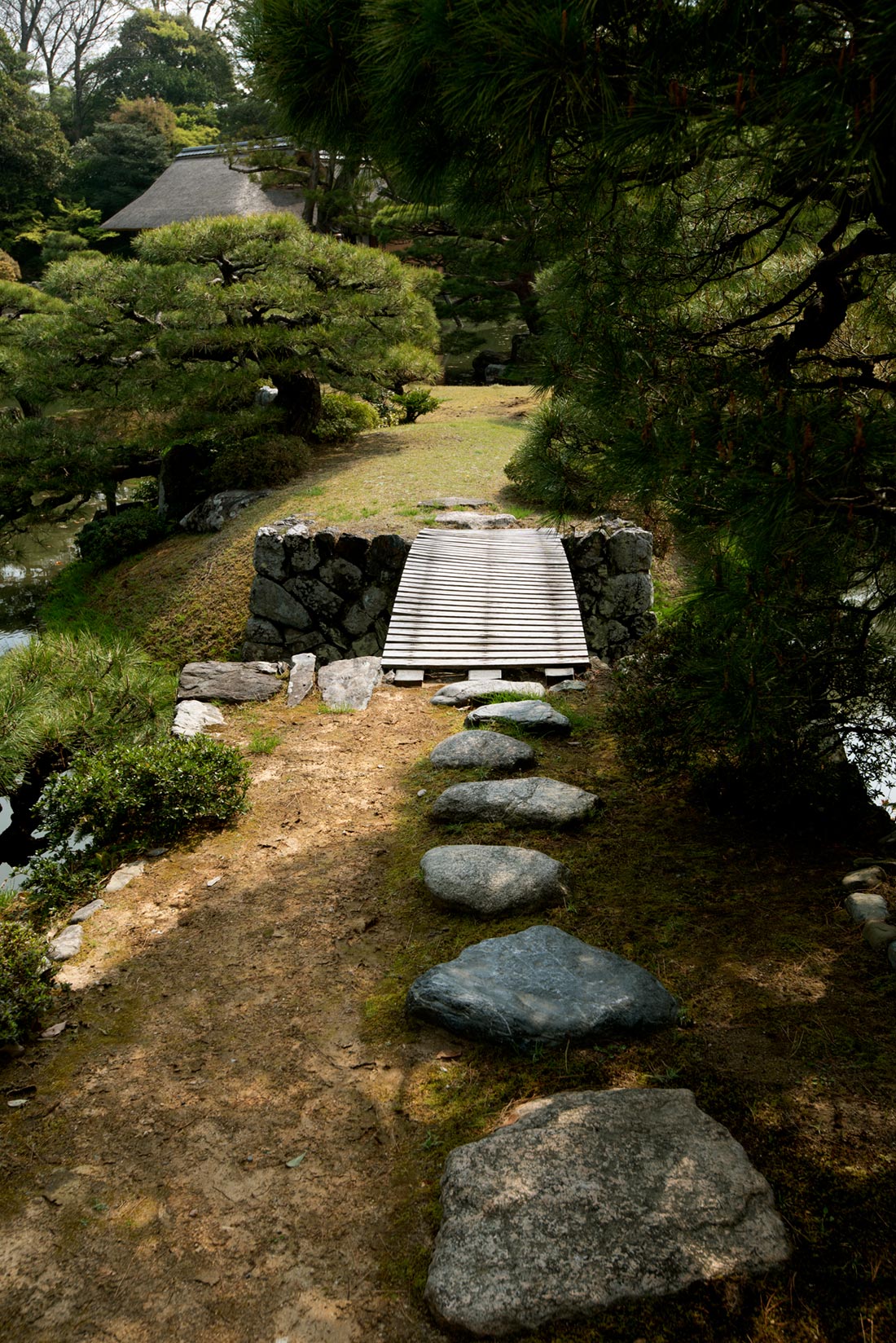 Teahouses and other scenes along the strolling path are concealed from view until one is upon them.

A visitor climbs up a mountain path to the Shōka-tei, or Flower-Appreciation Pavilion, a small teahouse surrounded by cherry trees at the highest point in the garden. It has the best view of the main house through the trees. 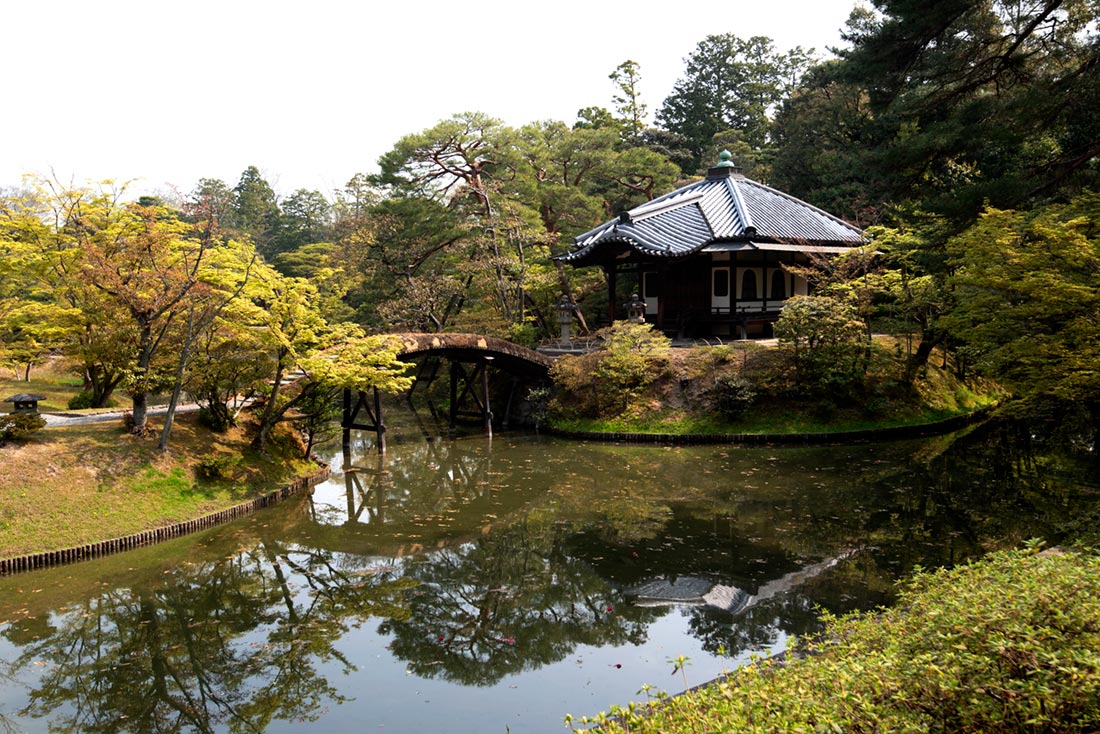 A tiled-roof shrine is reached over a bridge.

Katsura Villa became a highly influential source of inspiration for modernist architects because of a book about it produced by German architectyBruno Taut, followed by a number of other books by foreign architects. Famous architects flocked to the villa in the early 20th century and the 1950s and 1960s and were deeply influenced by it.

Its rustic human scale, simplicity and modesty as well as the materials – timber and paper – used in its construction became an inspiration for architects who wanted to design simple modern buildings.

Famous as one of the best examples of the essence of Japanese traditional design, the villa is rife with ambiguities over its building design, materials, history, place in Japanese culture and the way in which it became world-famous.

Taut, who lived in Japan in the 1930s to escape Nazi oppression at home, is generally credited with making the garden known internationally. He and other foreign modernist architects considered it a pure example of Japanese design and inspiration for modernist design. These architects saw Katsura Villa as  the pure culmination of the ancient Japanese tradition which incorporated modularity, transparency, austere surface materials, screens that divided space, and indoor-outdoor visual continuity. Unfortunately, some of their conclusions about the villa were wrong or oversimplified.

Further study of the villa indicates that it is an ambiguous combination of many influences. Its post-and-beam architecture has its antecedent in Chinese architecture and garden design brought to Japan centuries earlier. It also merges principles used in ancient Shinto shrines and the austere aesthetics and philosophy of Zen Buddhism.

Taut believed that the villa’s aesthetic meant it had more in common with lower class architecture than aristocratic architecture and therefore thought that although it was an imperial villa, it was a precursor to democratic architecture. However, the villa actually was used by social elites who gathered to enjoy viewing the moonlight, a popular aristocratic pastime. Its design includes ponds and strolling paths used for this purpose. The pond is in the center of the site surrounded by vista points that replicate in miniature well-known scenic spots, waterfalls, beaches and mythical religious paradises. This type of garden design was originally brought to Japan from China and later evolved into Japanese garden design with teahouses and gazebos so that visitors could stop and enjoy the various views. Winding paths connect the views around the pond.

Because Katsura pond is a labyrinth shape with small tributaries, the entire garden cannot be seen from any one spot but unfolds as one walks along, again in Chinese garden design fashion. Trees and buildings blocking the views from one another. This technique paradoxically makes the garden appear to be infinite in size, with each view unfolding and revealing its unique characteristics as one walks along.

Nature is at the center of the design, interspersed with low structures that blend into the scene, sending the message that ultimate beauty is found in nature rather than the manmade world.

Since the villa was modeled on The Tale of Genji and because the aristocratic practice of reciting passages from the book and other literary sources in gardens, on pavilions, on boats and in teahouses was part of Japanese court culture, the garden became associated with these quotations and references.  For example, the moon viewing platform of the Old Shoin and the Geppa-rō pavilion, meaning Moon Wave Turret, refer to a poem in the novel which speaks of the moon as a metaphor of something or someone desired yet unobtainable.

The result is an aesthetic that is exquisitely beautiful and well crafted without being overtly ostentatious, similar to a luxury resort that utilizes a simple, rustic aesthetic but still provides the highest level of comfort, convenience and service.  It was an aesthetic highly valued by aristocrats of the time, but was not considered of the lower classes. Katsura’s architecture was a result of a shift from wabi (simplicity and poverty) to kirei-sabi (gorgeous simplicity) popular among elites.

The villa’s raised floors are covered with tatami mats. Taut and other Western architects reached the conclusion that the roughly 3 feet by 6 feet woven mats were the main measurement used in the construction of the villa. The mats' obvious connection with the size of humans was credited with giving the buildings a comfortable human quality that was the opposite of Western-style palaces in which supersized ceilings and other features were used to impart a sense of grandeur and to intimidate visitors.

This conclusion is an oversimplification. Japanese architecture had a modular component, but it was based on the Chinese system of jian, called ken in Japanese. It means column distance and it was the foundation for systems of modular coordination using the span between wooden posts as the basic unit of measurement. Column distances determined the size of bays, rooms and openings. The Japanese also used a concept called ma, which is a sense of place and incorporated an understanding of the activities that took place in a particular space. These  techniques were applied to building in a much more organic way than the modernist architects insisted.

During the Edo period (1600-1868), two modular methods were standardized. The kyō-ma method is based on standardized tatami and variable column distances or the ken, whereas the other method, the inaka-ma method, was based on a standardized ken, but included variable tatami sizes.

Japanese floor plans rarely included any measurements because carpenters knew which system to use and its rules predetermined measurements. The rules were professional secrets handed down orally from one generation to the next and associated with specific carpenter families. Fortunately, some principles were written down in manuals, hidensho, or "secret hereditary writings." so the general knowledge of them was preserved.

Proportions, or kiwari ("wood dividing"), were applied automatically, and in many cases subconsciously, by a builder according to custom. Systems of proportions differed in different periods, regions and workshops. The primary module was the ken, and the tatami mat became a second important module in the sixteenth and seventeenth centuries. The modular method was not standardized in the modern sense of the word, however.

The Katsura Villa in particular and Japanese architecture in general influenced modern design of buildings in many ways.

The terraces and porches on the buildings served as indoor-outdoor spaces  where people could view the landscape, linking the interiors with the outside world. This style has become popular in modern homes and other buildings throughout the world.

The villa’s translucent shoji screen walls and white or painted moving screen partitions were used to separate spaces into various rooms or to open rooms to the exterior decks' screen walls. Modernist architects have borrowed this technique in a wide variety of applications to make homes, office buildings and even churches more versatile. In and outside Japan, the use of translucent glass to modernize shoji screens is widespread. 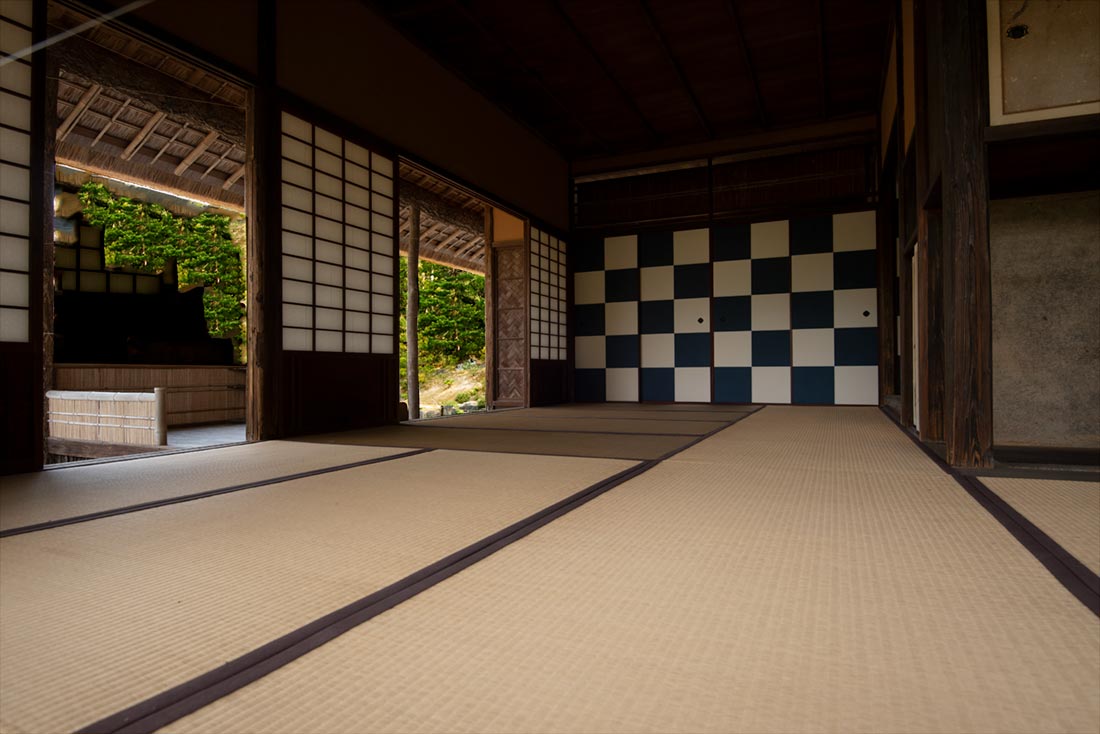 The villa’s buildings are made of timbers and paper, so they were badly damaged over time. All of the buildings were dismantled and reconstructed between 1975 and 1991. What has survived from the 17th century is the design. European modernists were deeply impressed by the concept that the architectural design had survived because of its beautiful proportions and quality rather than its materials. They enthusiastically embraced the concept that it was the design, rather than necessarily the materials, that needed to be preserved – a concept that freed them to experiment with new materials.

Modernist architects’  books emphasized Katsura Villa’s spare, geometric interiors at the expense of the villa's more organic looking thatched roofs and irregular, rustic wood components. The modernists gave less emphasis to the organic irregularities in Katsura Villa that give it spontaneity and a connection with nature that much modern architecture lacks. 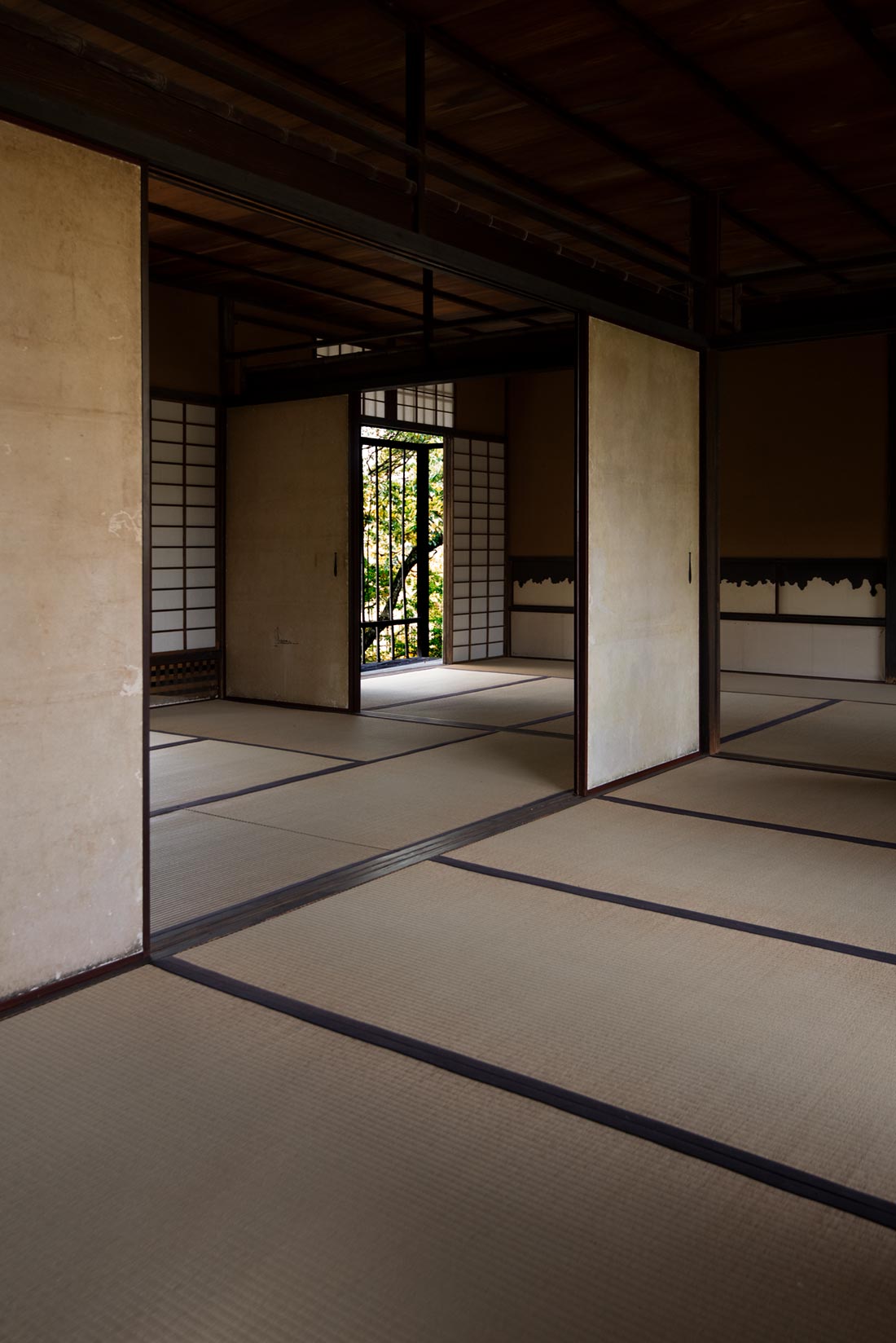 The modernists emphasized the openness, geometrical shapes, movable partitions and austerity of Katsura Villa but not the more organic thatched roofs and use of rough timbers that give the villa charm (below). 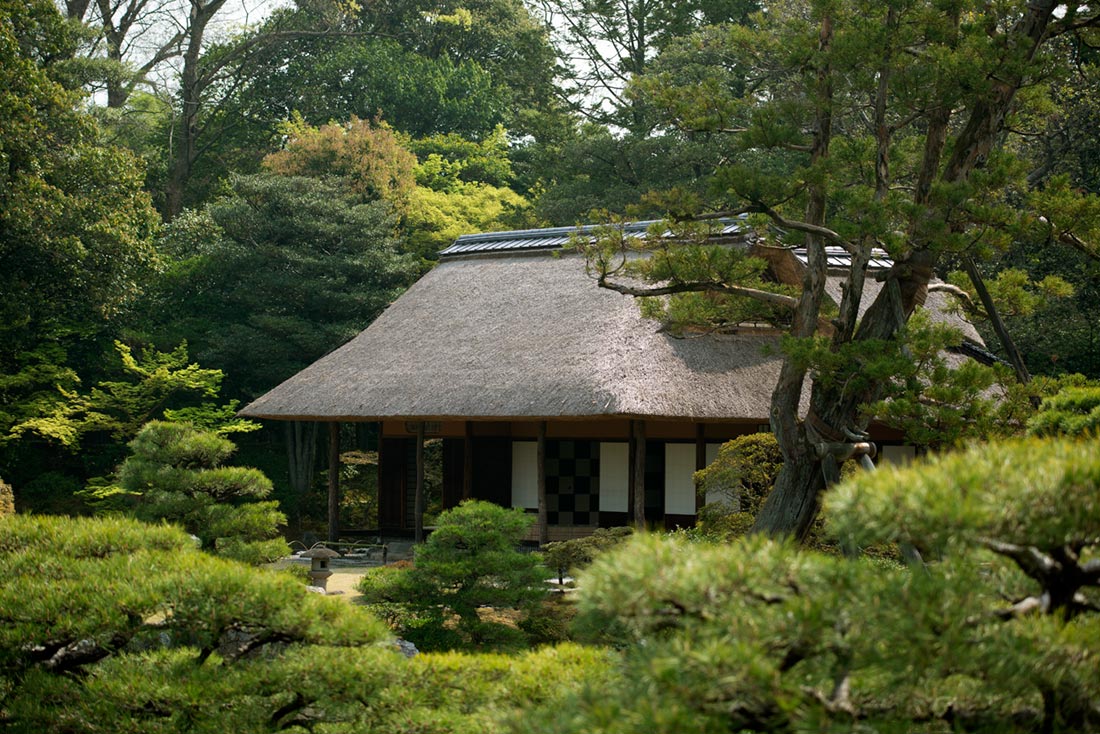 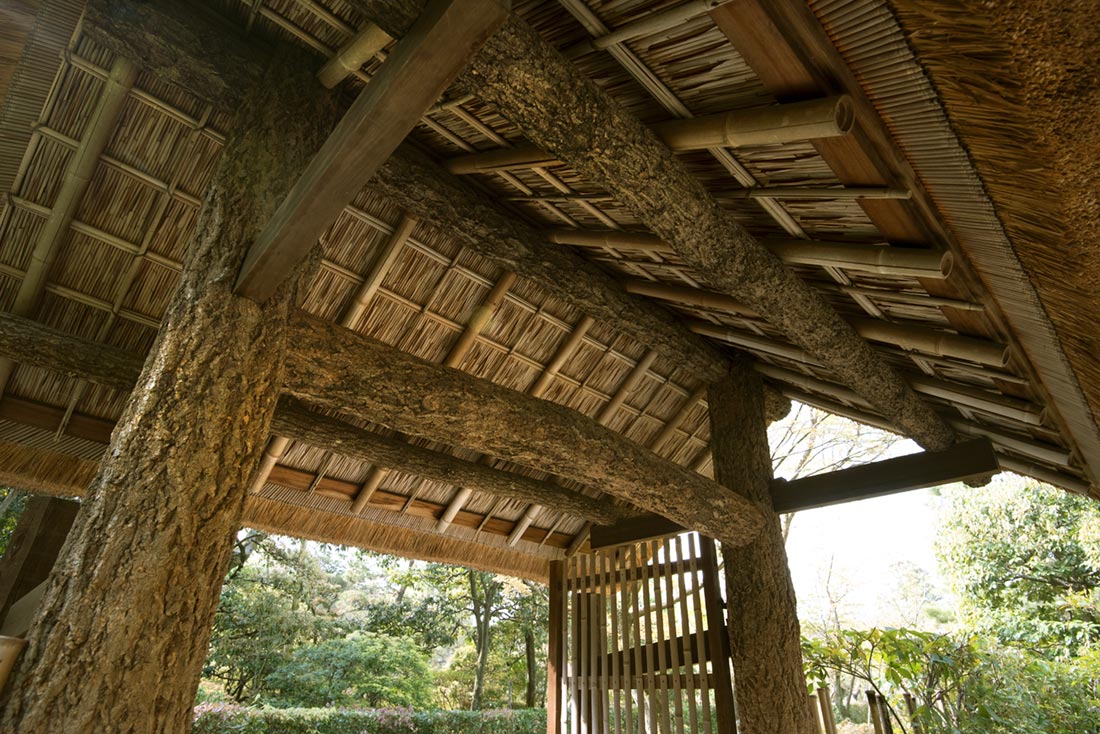 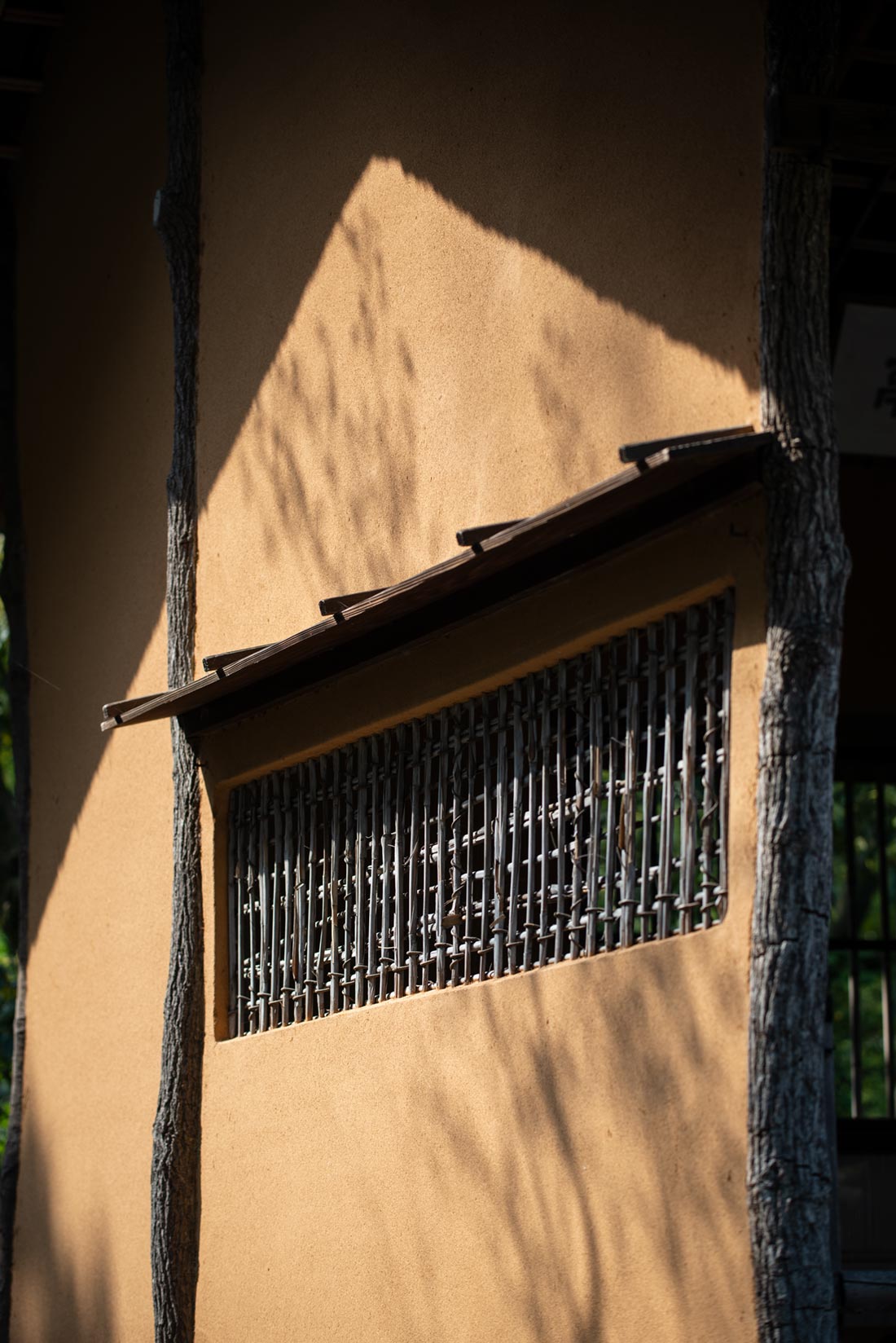 Modernist authors de-emphasized features of Katsura that didn’t fall in line with their spare modernist views, such as the many ornamental motifs at the villa. 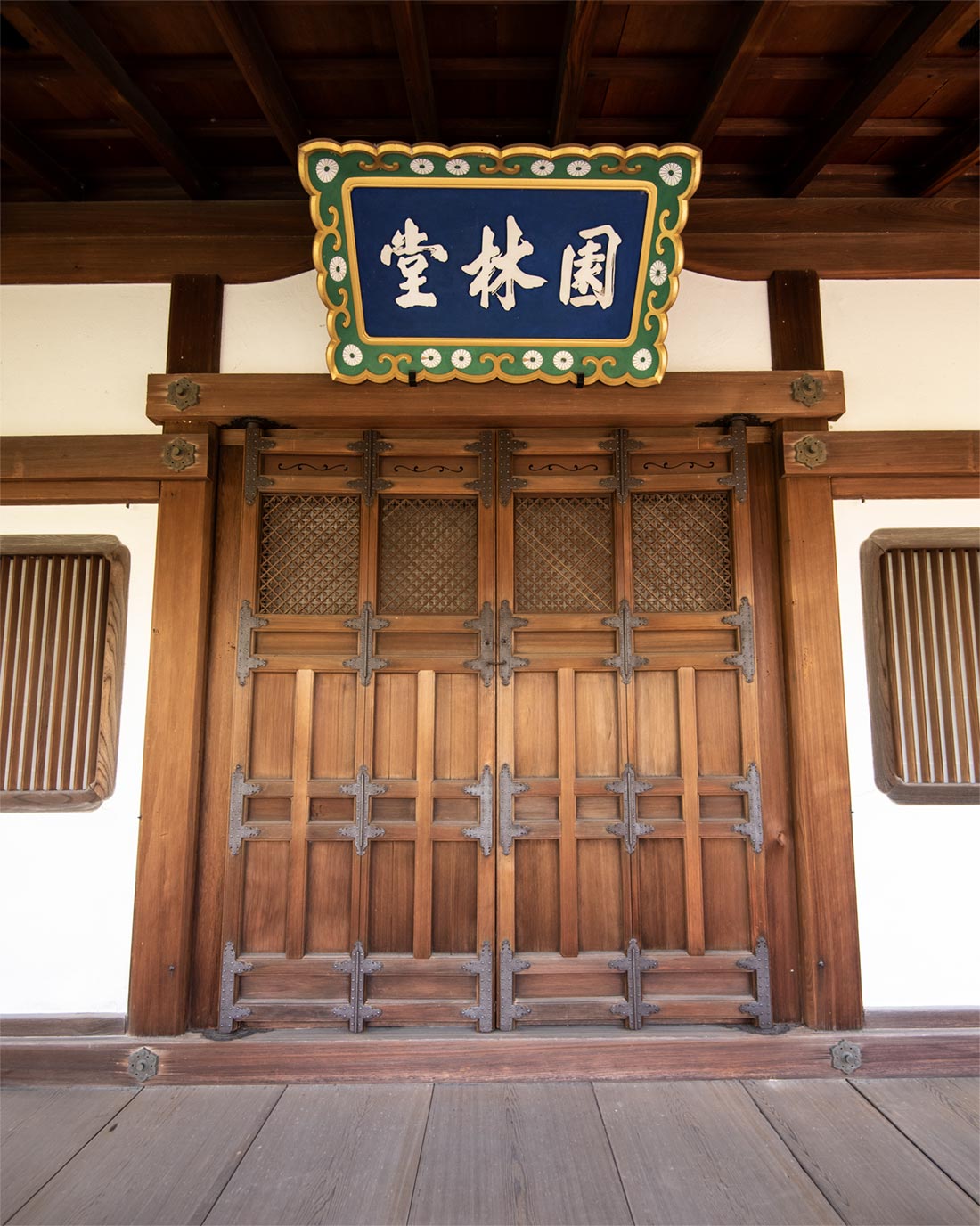 Ornate details on a door on one of the palaces.


Forrest and Donna Rouviere Anderson are writing a book about Japanese design.


See more photos by Forrest Anderson of Katsura Villa at